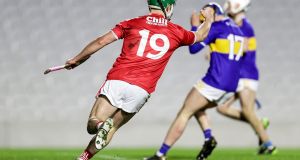 Cork stripped great rivals Tipperary of the Munster and All-Ireland U20 hurling titles by claiming their 20th provincial title at a bitterly cold Páirc Uí Chaoimh on Wednesday night.

The new champions compiled a decisive 1-4 without response in a hectic finish to sweep 1-16 to 0-13 in front as the game entered injury-time.

Substitute Brian O’Sullivan had a shot well saved by Tipp goalkeeper Aaron Brown in the 57th minute only for another replacement Jack Cahalane to whip in the rebound.

The visitors responded with an Andrew Ormond goal near the end, but time ran out on them.

The sides were level three times in the first-half with Cork holding a slender 0-10 to 0-9 interval advantage, having been 0-8 to 0-4 ahead after 22 minutes.

Tipp then rattled off four points without to restore parity with captain Eoghan Connolly deadly from long-range frees.