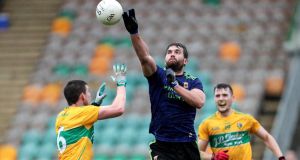 The years bound by. In what feels like a trice, Aidan O’Shea has gone from being the next big thing when making his senior championship debut just out of school in 2009 to an elder statesman 11 years later and captain of the fifth Mayo team he’s played on to contest a senior All-Ireland final.

This mad year, he’s turned 30 and although he parries the question about being in or outside the last-chance saloon, his answer makes it clear that he sees himself in the continuum of Mayo football and realises that his time tilting at the county’s eternal quest is passing.

“I have not thought about it. I have been lucky to play in quite a few [finals] and a lot of people would have said that this opportunity would not have afforded itself again. I book in one year after another and I see us as having a chance every year to get where we are because of the quality of player in Mayo. The future is strong.”

There are different aspects to O’Shea’s year – being captain and more of a fixture at full forward – and for the team there is also a plethora of changes. Like everyone else, they were waiting most of the year to get the championship started.

If he is reticent about focusing too much on the future, he knows the past is also fairly unrewarding terrain. The most comprehensive of the defeats in recent times against Dublin was inconveniently the most recent.

“At half-time it was more of the same but that is not how it transpired unfortunately . . . but we had opportunities in possession which we coughed up too easily and we did not get ourselves down the other end of the field to try and counter at all.”

As a leadership figure for nearly all of his intercounty career the captaincy was official recognition rather than the conferral of new status. Still, he was honoured, as the thought had occurred to him that he might be past such things.

“It is not something I have placed too much thought upon. Obviously it was a big honour at the start of the year to be asked. I have been quoted as saying that I thought that opportunity had passed me by, especially with the core group being a little bit younger but to be asked was huge.”

The move to spend more time at full forward wasn’t entirely novel in that he’s played in the forwards intermittently over the years but the deployment always came with an emergency clause.

“This is the first time I’ve had a right run of it. Ciarán [McDonald, forwards coach] and James [Horan, manager] came to me in February and said it was something they were looking to do but that they weren’t going to fire me there and take me out.

“It was, ‘we want you to be in there and play it and not if we lose a ball or two to be calling you out and then going back in’. It was to be a bit more consistent to the approach. It definitely took a bit of adjusting for me, going from touching the ball maybe 30 or 40 times in a game to touching it 12, maybe 15 times. There’s a bit of patience required.

“It just coincided that the club decided to play me there for the whole campaign and I got a lot of practice. I’m really enjoying it, having that run and the time to grow in there and learn as much as I can. I think it helps my team-mates as well, they know I’m going to be there and we can work around that too instead of in for five minutes and out for 10, or vice-versa.”

The team-mates concur. Cillian O’Connor, the top scorer in championship history, notched a further record in the semi-final with 4-9. He pays tribute to the captain’s impact on his game.

“I would have played with him before inside in 2015 and on and off in different seasons. Anytime you play beside someone with his handling ability, his tackling ability and his footwork in the tackle, it’s going to be a benefit because he’s going to create more chances for you.

“It’s been easier for him to bark and give out orders – I love playing alongside him.”

A rejuvenated team, a high-scoring attack and the captaincy make this an exciting challenge for Aidan O’Shea, who has never lacked confidence in himself. As a Leaving Cert student he did a diary for ‘The Irish Times’ and with the exam imminent he referred to the 2008 minor final.

“I’ll be back tomorrow as the clock ticks down towards English paper 1. I’m not feeling that nervous - when you’ve played in front of 84,000 people in Croker, what harm can a little book of questions do?”