Kevin McStay: Mayo may regret not going for broke when they had the chance 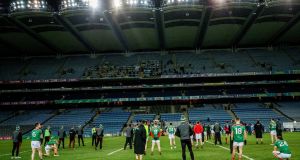 We drove home on Sunday thinking about the season that has just passed.

My wife taught English in school and during the conversation the idea of Mayo as a suitable subject for a Shakespearean drama came up. Not necessarily a tragedy; the team and tradition gives too many good days for that. But there is an All-Ireland arc that has the familiar pattern of a rise and fall. So it went on Saturday.

From the very beginning, the contest is catapulted into a place nobody predicted. Mayo respond to the goal with a series of lightning points

I was in Jury’s across from the stadium on the eve of the match. So I woke up on All-Ireland final morning right across from Croke Park and there wasn’t a soul around. Still, the first person I encountered when I made my way over was a solitary Mayo fan who simply had to visit the stadium. He even had a replica Sam Maguire. He was in good spirits. We were both optimistic that Mayo would deliver a massive performance. We agreed that Dublin would be predictably formidable. And we wished each other good luck

And within 14 seconds of the throw in, Dublin had a goal. It was their fifth palmed goal from eight in the championship. Here was yet another first; another freak statistic in all the century plus of finals. So with Mayo, if it can happen, it will. And here is the rising action for Mayo. From the very beginning, the contest is catapulted into a place nobody predicted. Mayo respond to the goal with a series of lightning points. The opening quarter is exciting and end to end and dotted with excellent scores – and lots of mistakes.

But my sense was that Mayo had thrown down a challenge. They had a foot firmly in the game and were level at the first water break and continued in that vein until the half-hour mark.

Sometimes games are won in minutes that go by unnoticed. I feel the 2020 All-Ireland final was critically shaped by the ten minutes before half-time, the half-time break itself and in the minutes before Robbie McDaid returned from his black card period on the sideline.

Mayo were admirable in so many ways during the first half-hour. They brushed off the Rock goal without a thought. They tackled with a confrontational edge which clearly threw the Dublin players a little. And they had a two-point lead after 25 minutes. And then comes the boy genius! Con O’Callaghan is faced with two or three Mayo men and he conjures a goal from nothing, really. And it was so badly needed for Dublin. Still, as we ticked towards half-time Mayo have the game level at 2-3 to 0-9.

And this is where the small things begin to add up. Ryan O’Donoghue has a shot into the goalkeeper’s hands from a very decent position. Cillian O’Connor puts a free wide. Tommy Conroy gets caught for an over-carry and shortly after that is short with another point attempt. Aidan O’Shea is turned over on the edge of the small square – it possibly could have been a free but he didn’t get the call. Here were chances to ease into a three- or even four- point lead.

And then they get a huge break when McDaid is black carded on a marginal call. Also Jonny Cooper’s point is cancelled during that play. So at half-time Dublin face ten minutes playing with 14 men.

Both teams have a chance to regroup with this knowledge in mind. There is a small manager’s room adjacent to the dressing rooms in Croke Park. You can lock the door and gather your thoughts.

The challenges both teams face are shared, in a way. Mayo have dominated the long kick-outs from both ends. Their man to man match ups are for the most part working. Cillian O’Connor has been unreal in that first half but unfortunately it is not happening for O’Shea and Conroy. The Mayo rookies are holding up. So Mayo can be more than satisfied with those three prerequisites. The fourth challenge was the impact of the substitutes and that has yet to reveal itself.

Half-time passes by in a flash. For the management there is time for a quick review followed by a second-half plan. Decisions are often dictated by events. Are you making these decisions from a position of comfort or stress?

Mayo’s stress levels were probably heightened by the report of Patrick Durcan’s injury. It’s a fire that has to be put out. Who should replace him?

Well, what do you want to achieve? Do we want to sweep or push up and go for it with the extra man? Imagine the Mayo mindset here. We are subduing Brian Fenton and have Dublin’s long kick-out in tatters; so do we increase the pressure there and bring our running game into it? Mayo had been so brave up to this point. And maybe it was the time to just go for it.

Against that, you are two down on the scoreboard despite having played the better football. If you gamble now and cough up a third goal, you are in big trouble.

Dublin are amazing champions. Their start was electric and their finish was routine – no fuss, get it done

Mayo opt to play it safe. They elect for a sweeper in Michael Plunkett. And when McDaid returns for Dublin, Mayo are still a point down. The chance to make the big statement and be a few points up going into the last push has vanished. They are still in it on the scoreboard. But now they will never know what might have happened had they thrown caution to the wind when they had the numerical advantage.

My sense was, have a go and change it if it is not working. Somebody like Keith Higgins – someone with that dash and bit of adventure might – and it is provisional – have caused a bit of havoc Mayo needed. But it is easy to say that in hindsight.

I was hugely stressed out in the All-Ireland club final in 2013 at that very stage; we were four down and some guys not going well. And management came up with a decision which would make you look off your tree if it doesn’t work. It worked for us that day and everyone was delighted afterwards. But there is no guarantee these things will come off.

You can argue Mayo were still right there at the end of the last water break. I think I said as much on RTÉ commentary. But look, Mannion has arrived. Howard is in.

And the final quarter duly plays itself out. Dublin stretched out to a four- and then five-point lead with ominous ease. The tension just left the game. And there was no sense of any recovery from the challengers. Mayo had resorted to the high dropping ball to an isolated Aidan O’Shea and the game was played out along wholly predictable lines . It was anticlimactic and, after the epic tussle of previous years, very strange.

It was a black night and quiet when I left the ground. And it wouldn’t have been the scene I would have chosen for Mayo to win

Dublin are amazing champions. Their start was electric and their finish was routine – no fuss, get it done. Eight wins from ten All-Irelands is something the GAA has never seen in football. Five clean sheets in five games this winter and an average winning margin of 15 points per game.

And they were not even at their best in this one. Does that give hope to the other contenders? With a new season just around the corner? I am not sure. Their player of the year candidates are coming into their prime. I do think the gap is narrowing and that there will be a gargantuan effort by the other counties. The thing is, close is not good enough.

The profile of Dublin’s squad will continue to change. Look at who didn’t make their match day 26 – Cian O’Sullivan, Paddy Andrews – and the guys who didn’t get minutes on Saturday – Michael Dara Macauley, Kevin McManamon. It is a very cold and brutal environment. The same is true with Mayo – Colm Boyle, Keith Higgins, Donal Vaughan, Séamus O’Shea. There is not a lot of sentiment there because there can’t be.

It was a black night and quiet when I left the ground. And it wouldn’t have been the scene I would have chosen for Mayo to win. We waited 69 years. They can wait a little bit longer. Dublin know what an electric Croke Park is like. They struck the right note after this unique pandemic era All-Ireland, one of reserved internal satisfaction rather than delight. The sense they gave was of building towards something again.

I feel certain Mayo will have a say in that – I think they will win an All-Ireland within Cillian O’Connor’s time playing for his county. It won’t be easy to knock Dublin off their perch. But if it was easy, it wouldn’t be worth fighting for.