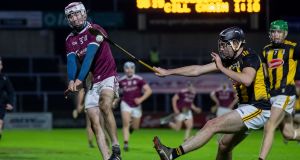 This group of Kilkenny players must be sick of the sight of Galway in particular Donal O’Shea who struck 0-12 to secure their Bord Gáis Energy Leinster U-20 final place.

O’Shea, the minor Hurler of the Year in 2018, fired 0-10 in the 2018 minor final defeat of Kilkenny and returned to haunt the Cats in Portlaoise.

Galway outscored the holders by 0-8 to 0-2 in the closing 20 minutes and seven of those points came from free-taker O’Shea, son of former Tipperary senior manager Eamon.

Galway led 0-11 to 0-8 at half-time but had been level on eight occasions and were grateful to goalkeeper Darach Fahy who denied Eoin Guilfoyle with two excellent saves.

Guilfoyle eventually got his goal early in the second half and a point too from Ian Byrne left Kilkenny 1-9 to 0-11 up but they didn’t score from play again as Galway rallied.

They’ll play Dublin in the January 3rd final after the Sky Blues held firm in Carlow to see off Wexford 1-19 to 1-10.

Dublin led by 0-8 to 0-7 at half-time and surged ahead in the third quarter with points from Darach McBride, Kevin Desmond and Eddie Gibbons.

Gibbons also struck their 41st-minute goal to leave nine points in it and Dublin could afford to concede a 52nd-minute Wexford goal and still cruise home.