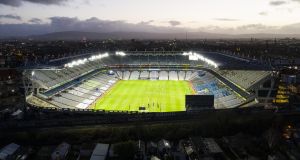 The GAA has announced the master fixture plan of their new streamlined and entirely split season for 2021, the intercounty league and championship taking place before the exclusive club window opens, with a return of the All-Ireland club finals in January of 2022.

As agreed by Central Council at the weekend, the new season will start on the last weekend of February with the Allianz Football League organised on a regional basis, but within the same divisional structure; the Allianz Hurling League top flight will be run as before, only the top team in 1A and 1B will face-off in the final.

Speaking via an online media briefing, Croke Park’s director of games administration Feargal McGill outlined the main reasons for putting the county before the club, adding that such a split season may become the permanent plan depending on the outcome of Congress in February.

“We didn’t have as much time available to us, as we would normally have, with the championship finishing so late,” said McGill. “We wanted to provide some proper down-time for counties, so that ate into the time available.

“This is a split season, the first time we’ve had a proper split season. The year gone by, it wasn’t properly split, because we started with county, went back to club, then finished again with the county. So it will be interesting to see how it pans out, but I think it will have huge positive benefits for the club game.

“We’re happy to see the provincial and All-Ireland club championships back in there, and we do think we’ve created a very good window for club competition during the summer. So overall we’re pretty happy, I think it’s a better games programme than the one we had in 2020, there’s definitely a little bit extra in there.”

Asked about the putting the county first, then club later, he added: “In the short-term view, there was no guarantee we’d be able to play club games in the first third of the year, because they’re not allowed now, under Level 3.

“But looking at the longer time, if the GAA are to continue with the split season, and that will be on the agenda at Congress in February, I think the right decision is still to put the intercounty game first. I think it’s a no-brainer, to be quite honest.”

Collective senior intercounty training is officially permitted from January 15th, and the 2021 championship draw will also be made in January.

In football, the league will be initially played out as follows

The Allianz Hurling League will be organised on the same basis as this year. There will be All-Ireland qualifiers to allow for second chances, as opposed to this year’s purely knock-out format, used for the first time in 20 years.

Football’s Tier 2 Tailteann Cup will also take place, having been shelved this year because of the abbreviated season. However it was agreed that reigning provincial champions (including Cavan and Tipperary) will contest the Sam Maguire in 2021 regardless of their league status

The exclusive club window starts from July 25th, with county championships expected to conclude by October 24th. Provincial club championships will then run from October 16th to November 28th and the All-Ireland semi-finals in December followed by the finals in January of 2022

Asked about the possibility of getting supporters back in 2021, McGill said:

“That’s completely out of our hands, to be honest. We’d love to give you some positive news, it’s just a case of wait and see, but I think with vaccines and everything else, we have to be a little but optimistic that some supporters will get back in 2021.

“That also feeds into the question around county versus club first, and if we’d looked at this purely from a financial basis, we’d probably have run with club first, in the hope that towards the end of next year attendances might be back. But that would have been short-sighted, and not in the best interest of 450,000 club players. They have to be our priority.”