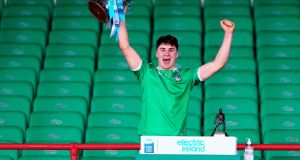 It took extra time but Limerick are Munster Minor Hurling champions for the second year in a row after seeing off rivals Tipperary at LIT Gaelic Grounds on Sunday afternoon.

It is just the second time Limerick have won back-to-back minor titles, having last done so in 2014, with goals from Patrick O’Donovan and substitute Eoin Harmon either side of half-time forcing the game to extra-time.

Tipperary started the stronger of the two sides and were three ahead before Limerick got off the mark with seven minutes on the clock when Shane O’Brien raised the white flag for the Treatymen.

In a low scoring opening quarter, Tipperary led 0-4 to 0-3 at the first water break.

But a well-taken close range O’Donovan goal after the break gave Limerick the edge.

And by half-time, Diarmaid Mullins’ side led Tipperary by two points – 1-9 to 0-10 after a Liam Lynch free and a 65’ from Peter McGarry edged the Shannonsiders ahead.

Substitute Harmon proved to be the hero for Limerick with just three minutes to go in the second half, finding the net after an impressive flick across the goalmouth by the in-form Adam English. This looked to give Limerick the win.

However, Jack Leamy and then Kenny Lee fired over late points for Tipperary in injury time to force extra time as it finished Limerick 2-14 Tipperary 0-20 after regular time.

Tipperary thought they had secured the win with the last puck of the game but their effort was called back after the linesman’s flag was raised earlier in the move.

Limerick secured the first four points of extra time with Doon’s English adding three points to his tally as Limerick upped the tempo to record a three-point win.

Limerick will face Galway in the All-Ireland semi-final on either January 2nd or January 3rd.