Clare leave it late to earn an important victory 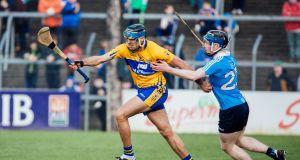 Clare emerged from Cusack Park in Ennis yesterday with two hard-earned league points as they defeated Dublin by a narrow margin in their Division 1A clash.

It took a pair of late points by substitutes Aaron Cunningham and Ian Galvin to get them over the line and earn a second win after four outings.

For Dublin it was a third defeat in four games, and they will have to get a result against Kilkenny in a fortnight’s time if they are have any chance of avoiding a relegation play-off.

Played in front of a crowd of 4,370, Dublin grabbed the opening score a Niall McMorrow point inside the second minute. Clare then hit three on the trot through David Fitzgerald, David Reidy and Ian Galvin as they eased into the game.

Liam Rushe and Donal Burke got on the scoresheet for Dublin while Clare midfielders Reidy and Jamie Shanahan also hit the target leaving the hosts 0-5 to 0-4 ahead after 14 minutes.

Then Dublin struck for the game’s only goal. A long delivery by Eoghan O’Donnell dropped behind Clare full-back Cian Dillon and broke to Dublin full-forward Ryan O’Dwyer who one-handedly flicked the sliotar past Clare goalie Pa Kelly.

This score gave the Dubs renewed confidence and they forged ahead until the break with a number of fine points. They deservedly led by five at the whistle, 1-10 to 0-8.

After half-time, Clare took the initiative and got the first three scores of the half. Impressive corner back Seadna Morey fired the first one over after a foray along the left flank and then David Reidy, unerring all afternoon, converted two frees.

Dublin replied with a trio of their own by Ben Quinn, Chris Crummey and Eamon Dillon to restore the advantage to five. The contest was developing into a tight and tense affair with Clare clipping at their opponents’ heels.

Points by Shanahan, Reidy (2), Cathal McInerney and Morey once more, had them on level terms by the 57th minute. Dublin regained the lead with a Chris Bennett free before Clare sub Jason McCarthy evened matters again on 61 minutes. Reidy and Bennett then exchanged points as the game headed tensely towards the conclusion.

In those final minutes, the home side dug deeper. Morey made another one of his trademark runs along the left touchline and forwarded to substitute Aaron Cunningham. The Wolfe Tones clubman superbly pointed from out wide on left touchline to break the deadlock. Then in injury-time Ian Galvin, who was replaced before the break but then reintroduced in the second period, fired over an insurance score to clinch the victory.

Dublin won a late free and lobbed the ball in to the square in search of a goal which failed to materialise.

Dubs manager Ger Cunningham was philosophical in his assessment of his team’s performance.

“It was always going to be tight coming down here,” he said. “Cusack Park is a tough place to come to. Looking back at it now in the cold light of day, we probably had chances in the first half that we needed to score and be a bit more ahead with the strong wind we were facing in the second half.

“We missed a couple of frees and I think we took our time to settle on their structure and what they were doing. We didn’t push up enough on their puck outs in the first half and they got a lot of possession and ran at us.”