Tickets, which cost €45 for a seat and €30 standing, were changing hands above face value 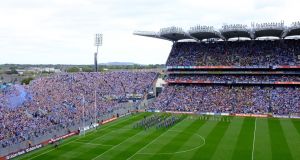 GAA fans are being warned against purchasing tickets sold above face value for the upcoming All-Ireland SFC semi-final between Dublin and Tyrone. Photograph: Bryan O’Brien

GAA fans are being warned against purchasing tickets sold above face value for the upcoming All-Ireland SFC semi-final between Dublin and Tyrone.

The fixture, which is set to take place on August 27th, has seen ticket prices soar in the run up to the hotly anticipated match.

The GAA have cancelled tickets that were being resold at above face value online for the upcoming semi-final.

Reports have emerged that tickets, which normally cost €45 for a seat and €30 standing, were changing hands and being sold on websites such as Seatwave. Seatwave is currently offering individual tickets for as much as €145, more than three times their original selling price.

Croke Park has taken action against this practice and a number of tickets have been cancelled. These tickets won’t gain the holder entry on match day as the unique barcode won’t scan.

Long-term and premium level ticket holders have also been warned about reselling tickets. Those who are found to have resold their tickets at more than the official asking price will have their tickets cancelled and won’t be allowed to purchase them again in future.

This is part of a crackdown by the GAA, who are keen to stop their tickets appearing on the black market and fans being over-charged.

“The GAA can confirm that it has cancelled a number of tickets for the upcoming GAA Football semi-final meeting of Dublin and Tyrone on August 27,” a statement released today by the Association read.

“Requests have also been made directly to platforms selling tickets above face value to remove them from sale and the situation continues to be monitored by the GAA’s ticket office.

“Supporters and members are urged not to buy tickets from unofficial sources for above face value as they risk purchasing tickets that may be cancelled.”

The GAA have noted that the number of cancelled tickets is in the double digit range.

Meanwhile, the GAA has confirmed that stand tickets for Sunday’s second All-Ireland SHC semi-final between Cork and Waterford are likely to sell out.