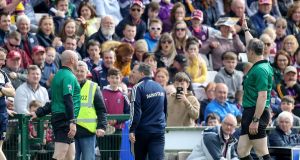 Hurling won’t outdo itself every week but there was a sense that, as an occasion, Galway-Wexford suffered stage fright in Salthill.

The teams scrapped their way to a 0-16 draw of this Leinster championship tussle which, for all the errors and stops, left the crowd fairly drained by the end.

And as is often the case, the old game seemed to drain Davy Fitzgerald, the Wexford manager of every ounce of energy and emotion in his body. It was only in the last 15 minutes that the day turned promising for Wexford and a magic outcome bloomed for a second when an unmarked Cathal Dunbar lined up for a 74th minute shot on goal which Colm Callanan stopped.

Fitzgerald had a splendid view of that play as he had been banished from the sideline following a heated exchange with the sideline official in the 44th minute, much to Galway delight. Davy shrugged when reflecting on the exchange later on. Asking him not to advocate for his player in the white heat is like asking Mick Jagger to quit the music lark. It’s a part of who he is.

“Damien Reck was taken out off the ball,” he said in the tone of a man who knows the jury is already scrolling through phones and thinking about dinner.

“It actually happened in the National League and I went and I proved a point to Croke Park and I said it to them and I can remember in the same game in the league, Joe Canning was down and hit and next thing the referee stops the play and he goes into the umpires and he checks it.

“I just don’t know why you can’t check things like that if you’re unsure and I think if you’re on the sideline and you see one of your players down on the ground after a slap and they end up getting a score out of it, like you’re going to be agitated, right?

“The sideline fella just couldn’t handle that I was so agitated about it. Did I tell him to f-off? I did not, 100 per cent did not. But he wasn’t happy that I was out remonstrating about that. Maybe they want to take away any bit of characters in the game altogether, I don’t know. But certainly I’m going to fight for every single thing I honestly believe in and I believe I was right in that case and I hope they’ll have the common sense just to see that.”

That’s out of his hands and he knows it. The spirit that Fitzgerald saw on the field made his eyes blaze with pride. In a first half when nothing worked, his players stormed back into the game, hit Galway for 0-7 without replay and probably should have won the day.

The performance was a setback for the maroon men as much as the result; they looked vulnerable and shaky as a unit here. The physical prowess was not as pronounced here and the defensive rock on which they built their All-Ireland summer in 2017 became stretched and isolated.

Surviving a home game is not an ideal preparation for the ordeal of a championship visit to the House of Cody, which is next on the schedule for Galway. In his prolonged absence through injury, Joe Canning becomes an even more vivid figure among this generation of Galway hurlers.

“Yeah, but we knew he wasn’t going to be here,” countered Micheál Donoghue.

“I have huge trust in this group. I’ve said it 100 times and I’ll keep saying it, anything this team has done has been on the collective, not on any individual. Any team would miss a player of his calibre, 100 hundred per cent.”

Plain, hard work was the order of the day elsewhere, too.

Up in Ulster, the claustrophobic rivalry between Fermanagh and Donegal promised all the creature comforts of a hard day’s work in the quarry. And so it proved: a remorselessly tough confrontation in which the home team set up a green wall and challenged Donegal to show the imagination to break them down.

It’s a policy that has made Fermanagh a horribly tough nut to crack and the Ulster champions were thankful for the return to full fitness, after almost a year out of the game of Patrick McBrearty. The Kilcar man landed five of the 0-15 total which was enough to see Donegal advance to a heavyweight semi-final date with Tyrone.

In Leinster, Kildare and Longford could not be separated after another Sunday which produced a cracking Gaelic football match. Both counties were all out of scores after the first period of an extra time thriller which finished 3-15 to 1-21, with Longford captain Mickey Quinn firing the third of his county’s goals to bring the day to a close.

The eventual winners will earn the dubious prize of a semi-final meeting against Jim Gavin’s Dublin. The All-Ireland champions inflicted a 5-21 to 0-10 mauling on Louth on Saturday, seemingly unperturbed by Paul Mannion’s first half dismissal.

The scoreline could be interpreted as a fairly ominous warning that nothing about Dublin – in terms of hunger or accuracy – has been blunted as they commence their bid for a a fifth All-Ireland.

Also on Saturday night, Mayo’s ambitions of landing a first Sam Maguire winter since 1951 was knocked back by a game Roscommon team who claimed their first championship win in Connacht since the year Knock Airport was opened. If ever there was proof Mayo are addicted to the complicated life, this was it. No county has travelled the road less travelled as often.

1 Gary Neville in Qatar an exercise in semi-journalism
2 Matt Williams: Expect the unexpected in rugby’s greatest tournament
3 Owen Doyle: Creeping professionalism of schools rugby a threat to the game
4 Leopardstown to continue watering and ensure ground is ‘fit for purpose’
5 Investment in our Olympic hopefuls may be costly – but it’s worth it
Real news has value SUBSCRIBE