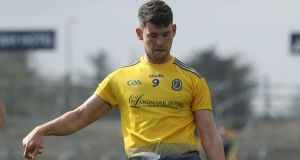 Small margins. Roscommon’s impressively emphatic win over a buoyant Leitrim could have taken a wrong turn from the start but Darren O’Malley’s one-on-one save denied Shane Moran the goal that might have pumped oxygen into the underdogs.

Otherwise Roscommon were assured in the way they set about dismantling their opponents and three first-half goals finished the job.

Mayo are flying high after the league win and didn’t get remotely threatened in Gaelic Park. James Horan is still coping with a bit of an infirmary, as the season moves on towards June but they look in good shape. Evan Regan is on the frees and gave a good account of himself in general play in New York but Cillian O’Connor’s (above) return is still anxiously awaited.

According to the announced team, Anthony Cunningham is still going without the Smiths, Enda and Donie but the lack of the former especially muffles the firepower.

Centrefield was energetic against Leitrim and Shane Killoran barnstormed through for two of the goals but Saturday’s direct opponents were the form centrefield pairing in the league and the physically aggressive template that blew them away in the 2017 All-Ireland quarter-final replay still carries a threat.

This could however be more of a speed-bump for the favourites than generally recognised but not a derailment.

Carlow literally went up in the world after the 28-point mauling when the counties last met five years ago but things have slipped recently with relegation and the confirmation of the stiff suspensions handed down for the indiscipline against Down in the league.

It falls primarily on the sideline with manager, Turlough O’Brien, and coach, Steven Poacher, gone but Brendan Murphy is a big loss on the field even if he missed last year’s memorable summer. Meath got a fright on the first outing when Offaly’s orthodox attack caused severe discomfort for a while but Andy McEntee (above) will have been pleased that at least his team pulled out of the tailspin. Now warned and confident after their league exploits, Meath can move on.

The big tour begins. As a preliminary note of superstition, it’s all of 24 years and seven championship encounters since Dublin have followed up victory over Louth with an All-Ireland. Offaly are the only other Leinster county the champions haven’t dispatched en route to the Sam Maguire at some point during the current decade of plenty.

Under Wayne Kierans, Louth had a decent league – especially in the context of being favourites to drop to a second successive relegation – and were in the promotion conversation until the end.

They had a battle to get Wexford under control in the first round but Ryan Burn’s cameo off the bench helped with an impressive late surge of six unanswered points.

But in terms of on-field practicalities the match is about taking Dublin’s pulse. Jim Gavin’s selection will be interesting and most of the focus will centre on whether Rory O’Carroll ends his four-year exile from the county game at some stage this evening.

Time doesn’t stand still but he is a clever player and still sufficiently young to make a go of the comeback if his form is deemed good enough and realistically, if it isn’t for a provincial quarter-final, there would have to be longer-term doubts.

Ten years after they met in the provincial final, paths have diverged. Tyrone have fallen back before commencing another climb and go into this as last year’s All-Ireland finalists. There have been a few signs of turbulence in camp with two gifted forwards, Ronan O’Neill and Lee Brennan, walking away so far but it’s hard to see a role for walk-away players in Mickey Harte’s (left) scheme of things. They had to sweat a bit harder than expected to see off Derry, who had difficulty with Antrim in the league but with four championship newcomers, Lenny Harbinson will be more interested in performance than outcome.
Verdict: Tyrone to win

A third meeting for the teams after two league encounters, both won by Westmeath by three points, which indicates two things: Jack Cooney’s side, winners of O’Byrne Cup and Division Three titles, look better – but not by much. John Sugrue did well with Laois last year and Donie Kingston and Evan O’Carroll have caused trouble against Westmeath to date but the reason the latter came out on top is that their defence is very good and Ger Egan is having a terrific season up front. John Heslin wasn’t in top gear in Croke Park by his standards and if he hits his stride, Westmeath have a definite edge. Verdict: Westmeath to win

Mood music not exactly tuneful for either team going into this. Longford did really well to survive the loss of Mullinalaghta players during the league but the siren call of the US has clipped Pádraic Davis’s options.

Cian O’Neill’s side stuttered in the league and had to scramble to get past Wicklow in the first round, neither of which is a championship credential but the upsurge in form last summer after a demoralising defeat by Carlow showed the team’s capability. This year’s model isn’t however as strong but should be sufficient unto the day. Verdict: Kildare to win

On one level this is a potential dogfight, patterned by the feisty league encounter, won by the home side. On the other it is a rerun of last year’s Ulster final, which laid bare Fermanagh’s limitations in the face of vastly superior firepower. You would imagine that this being the summer, the latter precedent is more persuasive. The problem for Rory Gallagher’s team is how stricken they are by caution even when having to chase matches. Donegal last year showed little mercy, piling on the scores – unlike Monaghan who diced with death against Fermanagh and lost to a late goal – and with Michael Murphy back in top form and a range of young talents on hand, they may not win by 12 but they should win.