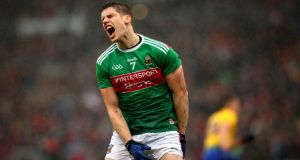 Greta Thunberg needn’t worry herself. Saturday night in Castlebar was a reminder that some things are hardy enough to survive the worst of whatever the climate crisis is packing. Mayo’s talent for self-immolation is a thoroughly reliable resource at this stage, an ever-burning flame destined to sustain itself and possibly the rest of us for decades to come.

The year will be 2079 and a polar bear will float into Clew Bay on the last of the last remaining ice-cap and just as it’s about to feast on the only surviving foodstuff – the neck of Michael Ring – a lonely Mayo free-taker will be kicking a wide in the next field.

In the diamond in Westport, a big screen will show replays of own goals and botched kick-outs playing on a loop, the glitchy feed a hopeful reminder that high-speed rural broadband will be arriving any day now. The county crest will be a rake lying flat, ready for any and all to step on its teeth.

The worst of it on Saturday night from Mayo’s point of view is that the old sins endure. Even now, even after all the hard-earned lessons, even after every regime change came with a checklist of identifiable mistakes to be rectified, even after all that, they still lost a big game in the old way.

They had enough possession, made enough tackles, created enough chances. They did everything you do to win a game except the only thing that matters.

Outside of Darren Coen and maybe Fergal Boland, their shooting was rushed, scattergun, completely without poise. Lee Keegan, Diarmuid O’Connor and Kevin McLoughlin all missed routine opportunities – the sort, yes, exactly the sort you never see a Dublin player miss.

Mayo have no chill. Never had. In many ways, this has always been both their greatest weapon and the weakness that offered the most hope to their opponents. At their best, Mayo play with the needle so deep in the red that the other crowd can’t hear themselves panic. They did it occasionally on Saturday, turning the Roscommon kick-out into a free play at times and pouring forward like Zulus over the hill.

In that mode, they’re impossible to stop. Too fast, too strong, too honest, too committed. When they’re at full pelt like that, they are the wick and you are the wax. Even Dublin have found that out at times.

And yet they have no All-Ireland, the one thing they crave above all. On too many occasions, they either haven’t expressed that superiority with enough scoreboard eloquence or they have applied the same loss of reason at the other end of the pitch with calamitous results. Both elements combined on Saturday night against Roscommon.

On another night – and indeed as has been the case on most other nights and days for the past two decades – they’d have found a compliant Rossie team to dig them out, whatever their peccadillos. But Anthony Cunningham has put together a steelier version than they’d be used to and one with a sharper cutting edge. And so Mayo got punished in a way they wouldn’t always have been.

The avoidable goal has always been their worst indulgence, dumb goals at the wrong time giving them too much to do or ruining the work already done. Rob Hennelly’s brilliant league final display ought to have been enough to purge him of nightmares past but that’s gone now. Three missed frees and a slapstick goal from a kick-out. Where is he to get confidence from?

Keith Higgins has seen Cathal Cregg play a million times. He’s shadowed him down a million blind alleys, turned him over and gone about his day. Before Saturday night, Cregg had scored three goals in his championship career. So maybe it was understandable that Higgins allowed him run off his blindside as the ball came out of the Roscommon defence for the first goal.

Or maybe he made got lost in the build-up, didn’t notice where Cregg was and couldn’t get back. One way or the other, Cregg nailed a goal. And now maybe Mayo have to worry about Keith Higgins.

They don’t need another flaw, is the point. Finding workarounds to turn their six-out-of-ten areas into eights has been the thing that has made them so compelling. They haven’t won an All-Ireland because they haven’t been good enough but they’ve come closer than everyone else because they have all the will and chutzpah to go around.

Thing is, the novelty of all that wears off eventually. It’s a good trick to be able to hover your hand over a candle but if you’re actually getting burned doing so, it kind of defeats the purpose.

James Horan didn’t come back to preside over the same shortcomings as before yet that’s what Mayo brought on Saturday. The road back now is longer than it needed to be, mainly because they’re still rougher around the edges than they ought to be.

After all these years, that’s pretty unforgivable.