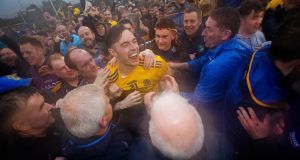 On a weekend when the green wave swept through the country in a political upheaval, another force of nature erupted at MacHale Park, Castlebar on Saturday night where Roscommon finally took the scalp of Mayo having waited all of 33 years to record a championship win over their neighbours at the Mayo venue.

The hero status may have been bestowed on substitute Fintan Cregg, whose point, two minutes into injury-time, scuppered the plans by James Horan for an All-Ireland assault through the front door, but this was a Roscommon team which stood tall as a unit and deserved a win which puts them into another Connacht final meeting with Galway.

A lot of the headlines before the game concentrated heavily on the second coming of Horan and his determination to retrieve a Connacht title Mayo hadn’t won since 2015 but the man who plotted Mayo’s downfall – Anthony Cunningham – came in for huge praise from Cathal Cregg. whose goal set this game alight as early as the sixth minute.

“He has really instilled that edge, that belief in ourselves. Maybe years in the past we would have gave up when things were going against us and would have conceded goals. I suppose the defensive side of things, he has really shored that up. He just gave us that belief to really maximise what we have in the squad.”

And that belief came into play in a game that was tight from the moment Mayo realised they were five points down (2-5 to 0-6) with half-time break rapidly approaching.

Mayo’s old failings in the finishing department came back to haunt them as the wide count reached 17, just two below the figure recorded in New York in their opening game.

However, the wide that will be most remembered came in the last of five minutes of injury-time when Kevin McLoughlin had the chance to send the game to extra-time but his effort curled inches wide of the posts.

It should never have come down to that but the Mayo manager may harbour some regrets over his decision to withdraw established freetakers Evan Regan and Jason Doherty as the game turned for home.

We will never know the answer to that but what was clear on a Saturday evening which turned very wet for the second half was that Roscommon are perhaps a lot better team that their league form would suggest, while the league champions are far from the finished article and now face a huge challenge of plotting a comeback through the back door.

Mayo’s misery was compounded once more by some poor goalkeeping decisions by Robert Hennelly and his quick kickout straight to Roscommon’s Andrew Glennon set up Ultan Harney, who flicked the ball to the net for their second goal.

Earlier, Cathal Cregg burned up the ground before firing a bullet past Hennelly as Roscommon shot into a 2-1 to 0-4 lead with 11 minutes gone.

Mayo recovered before the close of the half to outscore Roscommon 0-4 to 0-1, leaving just two between them at the break – 2-6 to 0-10- – Darren Coen and Matthew Ruane producing some excellent scores. But players like Diarmuid O’Connor, Fergal Boland and McLoughlin were marked absent in that half.

The man who really turned this game for Roscommon was their bulky full forward Conor Cox and his point on 49 minutes got the travelling supporters in full voice as the prospect of an upset now began to look very real.

The arrival of Andy Moran also brought a huge cheer as did his point, and with Mayo now looking the likely winners, that belief was reinforced further when Roscommon’s David Murray picked up black card in the 65th minute and was unable to be replaced as they had used up their quota of substitutes.

Back-to to back points from Fergal Boland saw the lead switch back to Mayo but Cox tied this game for the fifth time and extra time seemed on the cards until that stunning winner from Cregg in the 72nd minute.

McLoughlin’s missed free leaves Mayo now without a Connacht title for the fourth year in succession and facing another huge challenge to return to Croke Park through the more meandering route of the qualifiers.