Longford and Kildare draw in a curious sort of epic

They were level on eight occasions, including at the end of normal time and extra-time 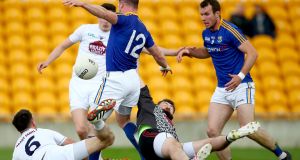 This was one of those draws where you’d struggle to make a cast-iron argument that either side deserved to win. It was a curious sort of epic in that it kind of moseyed along whistling to itself as it tumbled down the waterfall. The teams were level on eight occasions, including at the end of normal time and extra-time and yet you wouldn’t have said it was ever completely gripping.

Kildare were the slicker side and had a seven-point lead early in the second half of normal time but only added another two frees and were blessed not to be beaten. Longford had a big wind at their backs for the first half of extra-time but could only mine a freakish goal out of it. Neither side scored in the second-half of extra-time. You’d swear they knew that the prize for winning was an afternoon being fed to the Dubs.

“It was a massive battle but I suppose we’re most disappointed we didn’t finish it. The goals we conceded really brought them back into the match. We’ve things to work on and things to improve upon.”

He can say that again. Kildare showed flashes here of the side they were when they got to last year’s Super-8s. Their ceiling is clearly higher than Longford’s and yet they weren’t able to shake themselves loose at any stage. They went 0-4 to 0-0 up inside the opening 10 minutes with the excellent David Hyland running the show as a kind of free-roving midfielder without portfolio. He scored two early points including one direct from a midfield mark - a sign of the strength of the wind Kildare had helping them.

But for most of the rest of the first half, it was Longford who were the more impressive. Daniel Mimnagh and James McGivney speared some lovely points through the teeth of the gale and when Kildare committed too many players forward for a Longford kick-out on 22 minutes, Darragh Doherty was able to take advantage and nail the game’s first goal. In the space of 13 minutes, Longford had turned a four-point deficit into a three-point lead despite playing against the breeze.

Adam Tyrrell was probably the man of the match and it was his goal just short of half-time that settled Kildare. David Slattery came through on a burst and though he hit a weak shot that was saved by Longford keeper Paddy Collum, Tyrrell gobbled up the rebound. A Tyrrell free soon after left four between them going to the break.

It didn’t seem to be enough, given that Longford were going to be able to avail themselves of the same sort of kick-it-high-and-let-the-wind-do-the-rest scores in the second half. But Kildare started like a train in the second period and buffed that four-point lead out to seven. Longford had to find something soon, if they were going to find it at all.

Enter substitute Mark Hughes. Well, enter Kildare goalkeeper Mark Donnellan, who chipped a short kick-out straight to Longford’s James McGivney, who in turn fed Hughes in front of goal. It was a disastrous kick-out and got punished accordingly with the sub’s first touch after coming on.

Just like that, we had a game. And Longford had 17 minutes in front of them with only a single point to claw back. Tyrrell kept the board rolling at the other end for Kildare, however, as they knuckled down and looked to get out the gap. But Longford kicked fine scores from Hughes, Barry McKeon and Aidan McElligott to level it in the 70th minute.

It looked for all the world like they had won it when James McGiveney’s shot sailed goalwards in the 75th minute, so much so that the full-forward punched the air as it went on its way. But it caught the top of the post and bounced clear, sending us to extra-time.

Again, Kildare should have done the needful there as well. They came out with three rat-a-tat scores from the off through David Hyland, Jimmy Hyland and Ben McCormack. But just when they thought they were out, they pulled themselves back in. A wild Mimnagh shot looked to be going wide but McElligott got a touch on it to send it back across goal where Mickey Quinn applied the finish. All square, half-time in extra-time.

It was anybody’s. But neither side could manage a score so it was nobody’s.

“You’re never really happy not coming away with a victory,” said Padraic Davis. “But we have to look at it and say that I suppose they were in a position five or six times to kick on, we were probably only in that position a couple of times. But I think overall we deserved to get another crack at it.”

The replay is next Sunday in Tullamore at three o’clock.