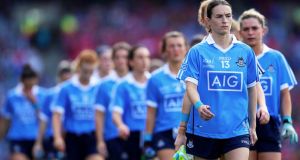 Ever so slowly, team by team, sports psychology has slipped into the world of GAA, to the point it’s almost accepted as a fundamental element of success.

There are, of course, the nay-sayers, putting it down as mere snake-oil salesmanship, but gradually the majority are beginning to sway in the other direction. The true value of it all is perhaps difficult to pinpoint; some, however, are better placed than others to evaluate its importance.

The Dublin captain has been lining out in a Dublin jersey since 2003, long before the idea of sports psychology was there to be scoffed at, but having remained omnipresent in the Dublin ranks over two decades she has witnessed the evolution.

Psychology can play a role, she believes, but that role can be overstated.

“I’ve gotten things from different people I’ve worked with,” explains the St Sylvester’s forward, “but I suppose it wouldn’t be something I’d be very invested in.

“Some people like the option of going to talk to someone who is maybe outside a management set-up, or have a different perspective – they’re not necessarily absorbed in our day-to-day journey. They’re coming from an outside perspective.

“I think, in all of this, you’re just trying to get that little bit extra – it might help three people on a team and maybe that’s it.”

The absence of a dedicated sports psychologist in Dublin manager Mick Bohan’s backroom team is noteworthy, especially given the side are currently aiming for a third All-Ireland title in a row, yet the team does have the luxury of expertise in this area.

Elaine Kelly, a former Dublin player, is a member of the management set-up, and her occupation as a psychologist has obvious benefits. At the same time the side have their own way of catering to their own needs, too.

“If there’s something we feel we need to talk about as a team I think we’re quite good at it,” says Aherne. “We’d have quite an open environment of people raising stuff that we should be talking about.

“And we have Elaine, so she’s there for people to go to if they want a different perspective or if they want to chat on something as well. She’s played for Dublin in the past, and is part of our set-up, so she has a sports frame. That’s helpful.”

Whatever your views on this relatively modern aspect of preparation, the mental wellbeing of players is an area that has come sharply into focus over recent years, as elite athletes attempt to juggle work and sport, not to mention a personal life.

The 2018 LGFA Player of the Year, for example, works with KPMG and although they are supportive of their employee’s pursuits on the football pitch – indeed they have also extended their partnership with the Dublin ladies football for a second season – she maintains she can still possess career ambitions. In fact, she feels not having interests outside football could very well be a detriment to her sporting career.

“I’ve been playing 15 years so I certainly couldn’t be putting the career on the long finger. You might have busy patches that you kind of have to get through. It’s about having that relationship to be able to say I need to take a step back or being able to be flexible when it’s coming into the crunch part of the season.

“It definitely has come up to a new level and continues to go. I suppose it’s the way the men’s game has gone. Look at that 15 years ago it was a hugely different game. I think we’re actually making those leaps, bigger leaps every year. It’s trying to balance between the two of them.”

So how do you define a healthy balance?

“I definitely think there are times when you need to take a step back because it does get to a stage, particularly when both are busy or strenuous. But at the same time I do think you can keep a balance between them, when you have an understanding from both sides.

“There are girls that come to the management at various times and say: ‘Look, I’m busy with work or I need to miss a session’. They’re very understanding about that. You need to make sure that you’re looking after yourself physically and mentally.”

One challenge, in both a mental and physical sense, the Dubliner will be facing over the next few years is the prospect of retirement.

Sportspeople regularly throw out the line about broaching the subject once the season is over and Aherne is no different. That’s all well and good, but the ability to prevent such thoughts from prying their way into the subconscious is a challenge in itself.

Again, 15 years of experience, underpinned by maturity and good advice, has stood the forward in good stead.

“The last couple of years we’ve been successful so it changes the dynamic of how you think of it in terms of going back. We probably switch off a bit more, I’d say. We wouldn’t be gung-ho about getting back before Christmas. We take ourselves down and get away from it, but you have to.

“After the intensity you get up to at the end of the season it is important for us to decompress and to take time away. We still see each other but much more sporadically.

“Everyone comes out the other side of Christmas and nearly thinks: ‘I can’t wait to get back to a bit of normality’. You know at that stage how you’re feeling.”

When the time is right to think about retirement, she’ll know.