Why periods must no longer be a taboo subject in sport

Athletes who incorporate menstrual cycle into preparation are reaping the benefits 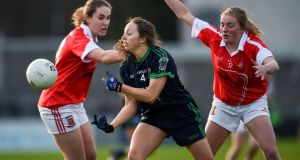 Foxrock-Cabinteely’s Sinead Delahunty in action. Delahunty believes athletes who incorporate menstrual health as part of their lives are the ones at the top of their game. Photograph: Tommy Grealy/Inpho

“It’s because my period came yesterday, so I felt particularly tired.”

The throwaway comment by Chinese Olympian swimmer Fu Yuanhui in 2016 sparked a wave of conversation worldwide, giving voice to the reality that female athletes at all levels can attest to: having your period can impact your performance.

“Fair play to her,” says Ellen Keane, Paralympian swimmer, over the phone. “It’s quite a personal thing, people didn’t want to talk about it, there’s still a bit of a taboo,” especially for swimmers who have to be “more careful than other sports”.

Being an elite athlete hastens the need to be comfortable with periods, but this level of understanding is gradual, and it can be intimidating. Keane remembers her period at 13 years old as “a horrendous experience”. To avoid using tampons she would wear two to three pairs of swimsuits, “it was fashionable then, everyone did”.

Tampons are one option for swimmers, but Keane, along with her team-mates, soon moved to the pill, so they could plan around competition weeks in advance.

Initially Keane was “fortunate” not to have any severe side effects, but switched to the coil after migraines, and her doctor’s warning about blood thinning and clots.

Given that swimming seems particularly sensitive to periods, it makes sense that there is less of a stigma among the team themselves. “We’re all close together in the changing rooms so we’d know if someone is on their period.” Aware of their roles as mentors, the more experienced swimmers compare symptoms, breaking the taboo of the subject for the newer athletes, which is “our version of locker room talk”, she jokes.

Sinead Delahunty, GAA player for Tipperary and Foxrock-Cabinteely, once thought missing a period was “quite convenient”, despite having less energy and being “cranky and short with people”. In December 2016, she took time out to go travelling, and 18 months later realised that she hadn’t had a period. She was diagnosed with amenorrhea, a condition where women and girls miss a period for at least three cycles, and it took months for her to get it back. Periods should be considered a vital health sign, Delahunty says, and its absence should force experts and women alike to ask: “If it isn’t happening, why not?”

With its taboo and assumptions it’s as though the value of the menstrual cycle is forgotten, and it’s just a burden of womanhood. But periods and lack thereof, can pose serious health risks: lower oestrogen levels impact on bone health and can lead to osteoporosis and fertility issues, says Gráinne Conefrey, co-founder of the FitrWoman app, which enables users to track their activity levels, symptoms, food and blood flow throughout the menstrual cycle.

It isn’t necessarily the cramps-inducing, chocolate-craving time we’ve come to expect, she adds, but a marker of health that positively affects training, if athletes know how to use it efficiently. “For example, during the first half of the cycle oestrogen and energy levels increase, so you feel stronger, making it a better time for strength and conditioning, whereas the second half is better suited to endurance training.”

The right information and knowing their own cycles facilitates athletes training at times most conducive to preventing injuries – ACL injuries are common at certain times of the cycle – while getting the most out of their workouts and recoveries. Education will enable all women, not just athletes, to reduce inflammation, improve sleep and feel better.

Although hydration, nutrition, strength and conditioning have long been pillars of an athlete’s preparation, the incorporation of the menstrual cycle is relatively new, and those doing it are reaping the benefits.The US soccer team have tracked their periods since 2016, but in the run-up to the World Cup, they streamlined their menstrual cycles even further in co-ordination with their training, nutrition, sleep and recovery. Similarly, a year prior to winning gold in the 2016 Olympics, the British hockey team tracked their periods. It seems, Delahunty remarks, that those who incorporate menstrual health as part of their lives are the ones at the top of their game.

Despite qualifying as a physiotherapist, Delahunty never learnt about the link between physical activity and periods. Recently, FitrWoman surveyed 14,000 exercising women, of these 82 per cent of women in the UK and Ireland didn’t receive any education about periods and exercise. The feedback the company received – from social media, emails, even the App Store comments – showed that women were learning not just about their own menstrual cycles, but periods in general.

“There’s definitely a gap in education,” says Conefrey, “school only provides a textbook knowledge, which feels very theoretical to a young girl who doesn’t know how to make herself feel better”. Like only doing the theory test, and being expected to drive perfectly, there is a discrepancy between the knowledge and the lived experience.

Education has to be available to everyone to ensure progress as the lack of knowledge isn’t limited to the athlete themselves but extends to their team. Delahunty, despite being on sports teams her whole life, has “never had a conversation with a coach, male or female, about menstrual health”. Research undertaken by FitrWoman found that 50 per cent of 1,000 elite athletes don’t tell their coach about their periods, despite the coach being instructive in the athlete’s training and nutrition, which are impacted by the menstrual cycle.

“It’s no one’s fault,” Keane says, but “it wouldn’t be fair” on her male coach to bring up tampons or periods, given that men haven’t been adequately informed about the menstrual cycle. FitrWoman Coach aims to teach the coach how to better support the athlete and as Delahunty mentioned: “Just because men don’t get them doesn’t mean they can’t be empathetic, or point them to the right information, or even FitrWoman.”