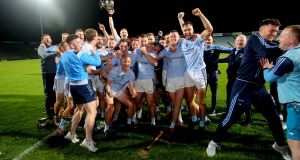 Two goals from David Dempsey and Peter Casey and a goal from Adrian Breen secured a sixth Daly Cup in 10 years for Na Piarsaigh as the Caherdavin men defeated Doon 5-27 to 1-12 in LIT Gaelic Grounds on Saturday evening.

Casey top-scored for the winners with two goals and four points - all from play - while man-of-the-match David Dempsey also got two goals for the newly crowned county champions.

The better side from the get-go a clinical Na Piarsaigh side were certainly worthy of their 27-point margin victoryand despite missing Limerick star Shane Dowling and Kevin Downes, the men in light blue were always on top.

Doon, again missing their talisman Richie English and Darragh O’Donovan, struggled against in-form Na Piarsaigh whereas the Caherdavin men, even in the absence of Shane Dowling, were always on top.

The pendulum was then to swing Na Piarsaigh’s way on 10 minutes as they hit five points without reply with Peter Casey scoring three-in-a-row and Henn getting in on the action before Casey put four between the sides.

And with half-time fast approaching, David Dempsey linked up well with Casey before Dempsey found the back of the net.

And a second Dempsey goal - minutes after the restart - put Kieran Bermingham’s side nine point ahead.

Doon weren’t for giving up and were rewarded for their efforts when Barry Murphy’s well-placed penalty narrowed the deficit to seven, after Josh Ryan was fouled.

But when Na Piarsaigh upped the tempo and Henn kept the distance between the teams, with his flawless free taking performance.

And when Peter Casey grabbed his first of two goals, the result was put beyond all doubt, with 15 points between the sides.

Further goals from Casey and then Breen in the dying moments ensured Na Piarsaigh romped to another Limerick club hurling title - their sixth Daly Cup title since 2011.