Donegal SFC final to go ahead despite positive Covid-19 test 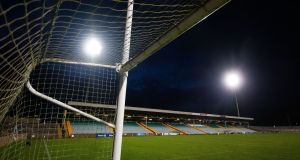 The Donegal SFC final at Sean Mac Cumhaill Park is set to go ahead this weekend. Photograph: Evan Logan/Inpho

The Donegal SFC final is still on despite a player from one of the clubs testing positive for Covid-19.

The Donegal Competitions Controls Committee (CCC) met on Monday afternoon and decided that Sunday’s game between Naomh Conaill and Kilcar will go ahead.

Over the weekend, a player from the Kilcar squad tested positive for Covid-19.

In line with GAA and HSE protocols, Kilcar ceased activity throughout the club on learning of the positive case.

However, the Donegal County Board said the final will go ahead as initially planned as there is currently only one positive case.

That could change in time if there is an increase in positive cases.

“The game is on because only one Kilcar player is positive,” said Donegal GAA PRO John McEniff. “If this changes and there are more cases then the game could be postponed.”

Sunday, October 11th, was believed to be under consideration as an alternate date.

That is the last available day for club fixtures with the inter-county season resuming the following weekend when Donegal are due to welcome Tyrone to Ballybofey in the penultimate round of the Allianz League Division 1.

On Saturday, the Donegal County Board confirmed a senior panel member tested positive for Covid-19.

The Kilcar case is not believed to be the same player.