Mickey Harte: ‘We are never as good as we appear to be at some times’ 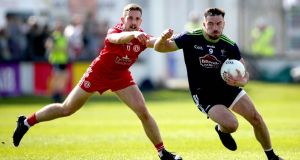 ‘Newbridge Or Nowhere’ screams the mural outside St Conleth’s Park, a fading memory of last year’s victory over Mayo when Kildare forced the GAA into an embarrassing about face.

So be it; nowhere for The Lilywhites as Tyrone wade deep into summer looking every inch the outfit Mickey Harte guided to last year’s All-Ireland final, if not better.

“Well, that has still to be decided and we wouldn’t decide it after one game,” said Harte, ever the footballing philosopher. “After we played Donegal we were supposed to be very poor and after today people will probably look at us and say we are very good.”

The last part is certainly true.

That may never be enough, but on this evidence Tyrone’s form has them precisely where Harte needs them ahead of an incoming weekend against provincial runners-ups. Clearly, the Super 8s needs the likes of Peter Harte (an artful 0-7 here), Darren McCurry (1-2) and Cathal McShane (0-5) to survive round four of the qualifiers.

Gaelic football needs Tyrone, but, momentarily, we must stall at the blistered feet of Kildare and their manager Cian O’Neill.

In the aftermath of this 10 point loss – conceding an unforgivable 2-17 from play in their outdated Newbridge fortress – O’Neill provided several excuses, including a long list of absentees and refereeing decisions, while refusing to consider his own future after four ultimately unsuccessful seasons at the helm.

O’Neill was sent off by referee Paddy Neilan for protesting too much on 27 minutes. He marched down the end line after a 45 was awarded against goalkeeper Mark Donnellan.

Oddly, despite Neilan signalling the dismissal, O’Neill didn’t leave the playing area. When the fourth official backed off nobody seemed to care.

“There was no cursing but I was outside the technical area [to argue with Neilan]. It’s important to get these things right in such a big match.”

Television replays appear to show that the umpire made the correct call.

“Once we went down to 14 they were ruthless,” O’Neill said of Mick O’Grady’s second yellow card on 49 minutes when five points already separated the sides.

“They had eight possessions. They scored 1-7. That’s incredible.”

It’s worth noting the contributions of Kildare’s midfield duo Kevin Feely and Fergal Conway, who combined for 1-5, with Conway’s perfect foot pass creating Feely’s lifeline goal on 30 minutes, but in all other areas they came up well short. Especially Donnellan’s inability to find a white chest from kick outs.

Onwards. Kildare have now been wiped out by the counties that contested last year’s All-Ireland final. So, what can O’Neill tell us about the road ahead?

“What I saw there, when Tyrone opened up, was a seriously athletic powerful team . . . I think they will be a match for any team left in the championship.”

“I feel Tyrone will be one of the teams giving it to them.”

How Harte’s men tactically go about this should provide fascinating viewing if they can reach the Super 8s because, seemingly, Tyrone have slipped back into a more defensive shell since losing to Donegal.

A disputable claim after this display.

“We know we may have to do something different, because every time we have come up against Dublin they have turned us over and other teams will be able to turn us over. So we have to have more than just that one style.”