Plenty to see here as hurling titles are up for grabs 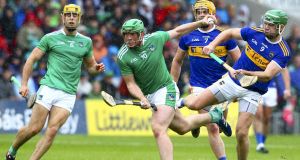 And so to the sort-out phase of the summer. By nightfall on Saturday evening the football championship will be down to the last 12. By the same time on Sunday two hurling teams 70 minutes away from an All-Ireland final. There isn’t a whole pile of time or room left for shadow boxing. Time to see what everyone has about them.

Or is it? The evidence of a fortnight ago tells us that Tipperary and Limerick are perfectly capable of playing out a Munster final that will come off as a facsimile of the real thing. John Kiely and Liam Sheedy have both been assuring one and all that you can’t be at that sort of thing in a Munster final, but then there was big talk ahead of the last game in the round robin too and it was anaemic fare that got served up. Are we sure very much has changed in the interim?

It’s all very well saying Limerick won’t want to go into the All-Ireland series with three defeats under their belt, but it doesn’t really mean very much, does it? We can presume they didn’t want to lose in such a wan manner to Tipp a fortnight ago either but when it came down to it they were off the pace.

Maybe that means a reaction is coming on Sunday in front of their home crowd. But the fact that there’s still a safety net means we don’t rightly know.

And what of Tipp? You’d imagine that the formula they’ve hit on so far this summer – manic work rate earning them the time and space in which to be so very Tipp – will continue to be their MO. But they’ve had the pedal to the metal for four games already this summer, which would have been enough to win them an All-Ireland in other years. They have at least three more days of it to complete before they reach Valhalla. Keeping up that pace is no given.

So the truth is,we can’t be sure what the Munster final will bring. Hurling’s habit of bending towards the light means that it won’t take an awful lot for a game to break out given the quality and competitiveness coursing through both teams. It should be a teeth-rattler, all going well. Here’s hoping.

In a way there are no such worries with the Leinster final. Limerick and Tipp can afford to have bigger things in the back of their minds. Kilkenny always do, and they go and play what’s in front of them anyway. But for Wexford this weekend is season-defining in a way that doesn’t apply to the other three.

Wexford are the only one of the four counties for whom a win on Sunday will unquestionably make their year. With the best will in the world, there probably isn’t an All-Ireland in them. But they’re in a Leinster final against a Kilkenny team who they have beaten, drawn with and lost by a point to in their last three encounters.

This is a genuine shot at a first Leinster title in 15 years, most of which time was spent in abject fatalism at the prospects of it ever coming around to them again.

One man in Wexford during the week told The Irish Times that they would be bringing “an awful crowd” to Croke Park. By which, in the most Irish way possible, he meant they’re going to jam the place to the rafters.

So Wexford will be gunning for it. And Kilkenny are Kilkenny. It should be the game of the weekend.

Although the two provincial finals ostensibly make it a hurling weekend, there’s an uncommon dash of stardust about the football qualifiers, considering it’s still only round three. Neither Kildare v Tyrone in Newbridge nor Mayo v Armagh in Castlebar would be out of place in the Super-8s.

Indeed, the net effect of them happening now will be to make the Super-8s ever so slightly less super later on. Little wonder Sky chanced missing out on showing a game last week in order to gobble up two of them on Saturday night – they hit pay dirt with the way the draw played out and have a possible five hours of that sweet, sweet football action ahead of them this Saturday evening.

Down in the shadows Laois v Offaly and Westmeath v Clare will play out to strictly local audiences, yet no less a reward is in store. The winners get a shot at Meath, Cork, Cavan or Galway (or just the latter three in Offaly’s case) for a spot in the Super-8s. They’d have bitten off wrist and all for such a prospect at the start of the year.