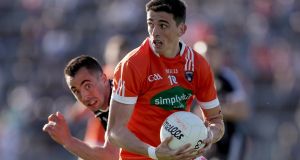 Armagh’s Rory Grugan was to the fore against Sligo on Saturday. Photograph: Laszlo Geczo/Inpho

A powerful second half from Armagh, the key score being Rory Grugan’s early second-half goal, set up Kieran McGeeney’s side for a deserved place in the third round of the qualifiers following their six-point defeat of Sligo at Markievicz Park.

Sligo, who came into this fixture on the back of a Connacht semi-final mauling against Galway, were without five players due to injury, including veteran defender Ross Donovan and forward Stephen Coen.

Dual star Gerard O’Kelly-Lynch, a Lory Meagher Cup winner with Sligo hurlers earlier in the day at Croke Park, was listed among the home side’s substitutes.

Armagh, who bounced back from their Ulster quarter-final exit to Fermanagh with a decisive win over Westmeath in round one of the qualifiers, were missing injured attacker Ethan Rafferty.

The counties’ only previous meeting in the football championship was back 2002, a quarter-final clash that went to a replay which Armagh won.

The visitors, comfortable winners over Sligo when the counties met in Division Three of this year’s league, struggled to cope with Sligo’s initial zest as the men in black led 0-3 to 0-1 by the 10th minute.

Liam Gaughan landed two of these early points, the second of which was a goal chance but the centre-forward opted to fist the ball over Blaine Hughes’ crossbar.

But Sligo turnovers in their own half were punished by an improving Armagh who shot four points without reply to lead 0-5 to 0-3 after 23 minutes, a recovery that hinged on three classy points from team captain Rory Grugan.

Sligo responded through the accuracy of free-taker Liam Gaughan, and they went back in front, 0-7 to 0-5 with 32 minutes played.

It was Armagh’s turn to dominate before the break however and they were 0-8 to 0-7 ahead at half-time thanks to fine points from Andrew Murnin, Niall Grimley and Ryan McShane.

Armagh’s decisive moment arrived in the 39th minute - it was a gift for the excellent Grugan who picked up Sligo goalkeeper Aidan Devaney’s short kick-out before planting the ball in the net.

Armagh added to their lead with superb pointed frees from substitute Grimley (he came on late in the first half) and even after a wonder point from Sligo’s Niall Murphy the Connacht county trailed by five points - 1-13 to 0-11 with 53 minutes on the clock.

Sligo’s situation worsened with seven minutes left when veteran forward Adrian Marren received a second booking and there was also a red card for Charlie Harrison in stoppage-time.

Sligo bagged a consolation goal in time added on when Cian Breheny netted bravely from close-range.