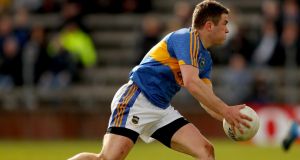 A drab encounter produced a dramatic finish at Semple Stadium as the lead changed hands three times in the closing stages of this Division 2 clash.

The outcome does little to enhance the promotion prospects of either team with Tipperary picking up their first point of the campaign and Fermanagh drawing for the second week in a row.

Rory Gallagher’s men looked like they had timed it to perfection, hitting the front for the first time two minutes from the end.

Then Brian Fox struck for his second goal to edge Tipperary back in front, only for Sean Quigley to cancel that with a penaty in injury-time.

But there was still time for Tipperary’s Liam McGrath, in the fourth minute of injury-time, to snatch a draw with a point from a 40-metre free.

Prior to that dramatic finish there was little for the sparse crowd of 667 to enthuse about with both sides guilty of some woeful shooting.

Both packed out their defences when they didn’t have the ball and the interval scoreline of 1-1 to 0-2 to Tipperary told its own story.

Tipperary, beaten by Meath in their opening match, got an early boost when a shot from Fox was dropped by Fermanagh goalkeeper Thomas Treacy and it dribbled over the line after six minutes.

They only managed a point from wingback Kevin Fahey from there to the break, with Fermanagh having to be content with points from a Quigley free and a good effort from midfielder Ryan Jones.

Tipperary edged Fermanagh by 0-2 to 0-1 in the third quarter before Conall Jones got through for an equalising goal with 12 minutes remaining.

Conor Sweeney and Quigley swapped points before Ciaran Corrigan put Fermanagh in front for the first time after 68 minutes, sparking an exciting finish where the advantage swung back and forth before McGrath saved Tipperary at the death.