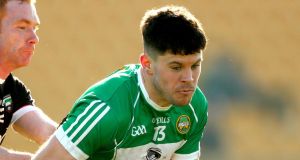 Bernard Allen earned Offaly a share of the spoils against Longford with a late point. Photograph: James Crombie/Inpho

A pointed free from Bernard Allen in the 70th minute earned Offaly a share of the spoils against a depleted Longford side at Pearse Park.

Longford lost Pauric Gill in the warm-up and then ace forward Robbie Smyth had to go off injured. The free from Allen came after Longford tried to keep the ball and goalkeeper Paddy Collum was penalised for over carrying.

Played in wet and miserable conditions, the swirling wind didn’t help either side. For all their possession in the opening half Longford just led by a goal at the break: 1-3 to 0-3.

Robbie Smyth brought two good saves out of Offaly goalkeeper Paddy Dunican in the first half and Darren Gallagher scored the game’s only goal in fifth minute when he collected Liam Connerton’s pass before finding the back of the net.

Offaly started the second half brightly with two quickfire points from Allen cutting the gap to just one in the 37th minute. Allen then set up sub Shane Tierney in the 39th minute to draw his side level.

Michael Quinn edged Longford ahead with a terrific point in the 40th minute and then three minutes later his midfield partner Gallagher scored one just as good. Sullivan and Gallagher exchanged frees as the game entered the final five minutes.

An excellent point from Eoin Carroll cut the lead to one point in the 65th minute. Longford should have extended their lead but failed to and then at the end Allen earned his side a hard-earned point.