Are the new sin-bin rules just letting players off the hook?

Players and managers welcome change, but it’s time to question the sharpness of its teeth 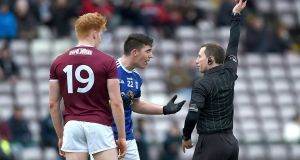 Hiding in plain sight, the introduction of the sin bin for black card offences had their first run-out in front of mass audiences on Sunday and, in general, the welcome for it among players and managers was reasonably warm. Which, of course, ought to ring all our alarms loud and shrill. When the subjects of a disciplinary measure are broadly in favour of it, it’s time to question the sharpness of its teeth.

Early days yet, of course, but it will be worth keeping an eye out for just how much the players test the boundaries of the new arrangement. Given the lighter sanction of sitting out for 10 minutes as opposed to the rest of the game, it’s interesting to note that there was an increase in the number of black cards in Division One in comparison to the opening weekend in 2018. The four games in the top division saw eight players sent to the sin bin over the weekend; on the equivalent weekend last year, the number of black cards was just five.

It would, of course, be wrong to extrapolate very much of anything from such a small sample size. The increased total could be down to the players deciding they can do what they like again, or it could just as likely be a result of referees awarding black now where previously they could have bottled a big decision and showed yellow. Most likely, it’s a combination of the two.

For players, the subtle change in what awaits a cynical foul will obviously give them more licence than they had before

“That’s why I advocated it,” said Jim Gavin after John Small and Robbie McDaid saw black cards in the opening half of Dublin’s game against Monaghan. “The sin bin gives more latitude to referees to make a call if it’s marginal. Obviously, David Coldrick interpreted it as two black cards but certainly the first one would have been up for debate. Listen, it’s swings and roundabouts.”

The two Dublin black cards were classic betwixt-and-between affairs. John Small’s foul on Jack McCarron was definitely cynical – McCarron pounced on a quick Evan Comerford kick-out and was through on goal when Small intervened with a clear tactical foul. But Small would be well entitled to argue that it wasn’t a definition black card drag-down.

Equally, Robbie McDaid’s foul on David Garland towards the end of the half was clumsy as much as anything, but the Dublin blood sub was carded all the same, mostly it seemed because he seemed to fall on the Monaghan corner-forward. Much like Small’s foul, it would have been a harsh enough punishment to make him sit out the rest of the afternoon because of it. It will be no real surprise now if referees feel they have a bit more wiggle room on their choice of punishment.

For players, the subtle change in what awaits a cynical foul will obviously give them more licence than they had before. With dreary predictability, the rugby tackle foul, which had for the most part disappeared from the game, re-emerged on Saturday night in the Mayo v Roscommon game in Castlebar.

Colm Boyle enveloped Ultan Harney in a takedown that wouldn’t be out of place at the Aviva on Saturday in the second half, as blatant a black card foul as you could wish to see. Mayo had a gale at their backs so it was no hardship for them to get by for a while with only 14 men. On a rotten night in MacHale Park, maybe Boyle figured he’d be warmer spending 10 minutes in one of those huge lagging jackets the Mayo subs were wearing than being out on the pitch.

The Cavan v Galway game saw five players sent to the sin bin, including the lesser-spotted double black-carding, with one player from each side sent to the stands in the same incident. Killian Brady of Cavan and Peter Cooke from Galway both walked, apparently on a double pull-down, although there it was suggested afterwards that one of the cards was for verbal abuse. Either way, Cavan ended up playing for a while with 12 men, during which time Galway ran up five points on the bounce.

Mickey Graham’s side made no real attempt to run down the clock when they were short the sin-binned players. Unlike the Dubs, who handled both periods with laconic ease, farming possession through long periods of handpassing and playing the ball back to Comerford. Brian Fenton scored the point of the day after a move which lasted two minutes and 42 seconds and involved Dublin stringing together 39 passes, including handpass chains of 10, nine and eight handpasses in length.

The Dubs’ game intelligence was something to behold throughout both periods – across those 20 minutes Monaghan only outscored them 0-4 to 0-3. They also did well to accidentally-on-purpose send Michael Darragh Macauley back on early to retake his place after getting his bloody nose cleaned up.

McDaid had committed the foul while on the pitch in his stead but as he trooped off on the black card, Macauley strode back on, apparently oblivious to the fact that Dublin were supposed to be down to 14 men. The whole thing took a minute and a half to sort out, effectively reducing the sin-bin period to 8:30.

Check for flies on the Dubs sometime. You won’t find any.