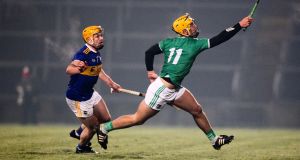 An upward shift in gear in the second half kept Limerick on the unbeaten road in Division 1A of the Allianz League, Tipperary repelled on a night of freezing fog in the Gaelic Grounds.

Strangely sluggish in the first half, Limerick didn’t score from play until Darragh O’Donovan pointed in the 22nd minute, but they remained in the hunt during that period thanks in large part to a flicked Graeme Mulcahy goal after 29 minutes, from a long Tom Morrissey ball.

Tipp had scored their opening goal in the 23rd minute, Willie Connors latching onto an inward Noel McGrath missile and passing brilliantly to Patrick “Bonner” Maher who matched the delivery with a superb strike to the net.

Connors grew in confidence as the half itself grew, landing a nice point from play himself minutes later, while Seamus Callanan knocked over the frees. Aaron Gillane did likewise for Limerick and the sides were level several times before half-time, a long-range point from Tipp wing-back Barry Heffernan proving the difference as Tipp led by 1-9 to 1-8 at the break.

Limerick spread the scores around in better fashion in the second half, with Gillane, Mulcahy, Byrne and - twice - Conor Boylan doing the business from play and they moved four ahead as the game edged towards the last quarter.

Jason Forde missed Tipp’s league opener through injury but came on in the first half here for the injured Dan McCormack and fizzed over three from play to prove he will key to their plans this year.

However, their wide count was too high - seven in the second half with Callanan’s accuracy dipping from frees - while Limerick kept on track.