Central Council must take their chance to change the game

Seán Moran: There will always be hostility to change but the GAA must act urgently 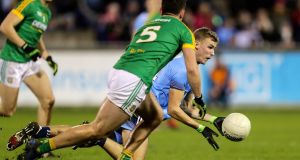 It’s early in the year for a meeting of such consequence but this Saturday the GAA’s Central Council have to decide on the future of the experimental football rules.

In one way the importance of the meeting has been overblown. It was always intended that the January meeting would review the progress of the five rule changes but more with a view to ironing out glitches than re-debating the merits of the proposals in the light of the secondary provincial competitions, concluding this weekend.

The added significance of Central Council’s decision has its origins in the meeting between the GAA and the Gaelic Players Association in late November after the new GPA chief executive Paul Flynn had issued a testy statement opposing in particular the restrictions on hand-passing.

The joint-communiqué issued drew attention to the ‘review’ that would take place in January. Whether that was intended to be a root-and-branch reconsideration or a snag list was left open to interpretation.

How likely, though, are Central Council delegates – who with unexpected enthusiasm embraced four of the five proposed changes and a modified version of the fifth – to do an about-turn on a decision that was so emphatically made less than two months ago?

The lightning rod is the restriction on hand-passing. None of the other four rules have generated anything like the same hostility from managers and many players. This discontent has been amplified because managers, particularly, and players are by and large the only people that media talk to about the games.

There is nothing particularly new in such reactions. A cursory glance through the progress of previous attempts to make significant changes to playing rules indicates that county managers are almost invariably opposed to them.

In 2005, for example, a number of experimental rules were introduced for the same period of pre-season competitions and league. Controversially one of them – the sin bin – was dropped before the league, the decision announced on an All Stars trip to Hong Kong, and replaced by a prototype black card – automatic substitution for certain offences.

When announcing the dropping of the sin bin, then president Seán Kelly cited the absence of appropriate facilities in many venues as a primary consideration but at the time the unremitting hostility of managers was believed to have triggered the retreat.

There are two major concerns about the current proposals. One is the capacity of referees to enforce it; these days, social media shines an unforgiving light on errors in matches and combined with anecdotal evidence, illustrates how tricky the counting out of hand-passes can be and has been.

Secondly, the leagues have become an awful lot more important to counties than used to be the case. The GPA made a reasonable point in drawing attention as follows to the position of counties who are unlikely to find major fulfilment in the championship:

“For many squads promotion from the National Football League is their main objective for the season. Implementing all of these significant rule changes at this stage, they fear, would disrupt their detailed game plans which have already been developed over the past couple of seasons and it could cost them a promotion.”

Yet experimenting with rules is best done as provided for in both rule and precedent in the national league with the highest standard of play, the best referees and facilities.

That the handpass proposal has been advanced reflects the deep unease within the game that kicking the ball has become a skill, the practice of which is in accelerated decline. This concern was also expressed by the report of the 2012 Football Review Committee report but it was decided that as hand-passing had shown signs of abating no moves would be made to curb the practice.

That ‘trend’ proved illusory, as can be seen by combining the statistical findings of the FRC and the current Standing Committee on the Playing Rules.

If the GAA wants to do something about this it is clearly time to act. There are those who say that there is nothing wrong with football but the transition to a possession-based game makes it less exciting on the simple objective grounds that the ball is in contest for a far smaller amount of time.

That is the basis of the most damning comparison with hurling where possession is contested several times a minute.

Given the strength of feeling on the quality of football at present, which is a factor, along with others, such as competitive imbalance, in its waning popularity – evident in both match attendances and television audiences – a review was bound to take place.

The problem is that such a fundamental attempt at genetic engineering is going to take time for acclimatisation. At times it can feel as daunting an attempt to modify behaviour as trying to get us all to drive on the right for a couple of months.

This is a matter of urgency. If limiting handpasses can’t even be trialled in 2019, there is little chance that the environment will be any more accommodating within the next 10 years by which stage, if the current trend holds the hand:kick ratio may have doubled again.

It’s not easy for any of those involved from match officials to players to managers and the SCPR’s own review – conducted independently by statistician Rob Carroll – may conceivably reveal insoluble problems.

Otherwise, though, if Central Council was sufficiently committed to the trial process as recently as November there doesn’t appear much point in aborting it a quarter of the way through the agreed period.