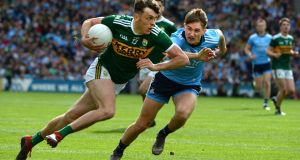 The world spins and here we are at the start of another GAA season. It’s a new year and a slate wiped clean. Dublin are still the five-in-a-row champions of course but the achievement is more than four months old and at the start of 2020, already slipping away into history.

Jim Gavin is gone and Dessie Farrell about to walk the Croke Park sideline for the first time as Dublin senior manager. In a way it couldn’t be more demanding than to face Kerry; viewed from another perspective, does it matter very much?

Yes it’s probably already this league’s biggest box-office fixture and eight years ago the counties pulled in nearly 46,000 to watch but what significance will it have later in the year?

Farrell knows that the work which lies ahead in terms of fashioning a team to meet his requirements is going to take longer than the couple of rushed weeks he has had since the end of the team holiday and as the Sigerson Cup played out.

That has already cost him Con O’Callaghan and distracts Evan Comerford, the DCU goalkeeper, who as Stephen Cluxton’s understudy, is scheduled to be busy while the captain is rehabbing from shoulder surgery over the next number of weeks.

It’s a state of flux for the champions but also a necessary stock-take and a new environment of opportunity for new or different players.

Kerry’s position, by contrast, is slightly more urgent. Peter Keane’s team navigated the league expertly last year – and remember in his first season, the new manager must have been alert to a strain of pessimism that saw the county as relegation possibilities.

That negativity evaporated as they won their first five matches and if the finale with its defeat by Mayo was a disappointment, it was experience put to use later in the summer. The team came of age last September, pushing Dublin hard both days until the contest ran beyond their grasp in the replay but what is the legacy – beyond Dublin eventually setting a new benchmark, obviously?

Kerry took away two things from the All-Ireland – complementary in a way but definitely different. Firstly, the seriousness of the challenge and quality of their play at times rubber-stamped the developing notion that, with their emerging talent, success was a matter of time.

That’s not an entirely comfortable brand for any team, however accomplished. It’s one thing to walk out of Croke Park in September as consensus All-Ireland champions of the future and another to have to set about delivering on the promise within 12 months.

There is huge expectation and David Clifford’s elevation to the captaincy has added buoyancy to the mood in the county.

Then there is the second consequence of last year’s final. As the late Páidí Ó Sé noted to his cost, the Kerry public are a tough audience and it hasn’t escaped the notice of many that for all the youthful promise heading into a new decade, last year’s All-Ireland – and with it, the indescribably exquisite opportunity to spike Dublin’s five-in-a-row – was for a few minutes theirs for the taking.

There is even surprise in some quarters that this hasn’t been a more persistent public frustration – hitting the front with a few minutes left and the champions down to 14 for nearly 40 minutes. In Kerry it is simply impossible that this hasn’t been grating away at the team – 11 of whom start this weekend – in the meantime and that’s a useful antidote to all the dreamy visions of silverware yet to come.

It’s likely that neither county sees league success as an integral element in a successful year. They may attain it but they won’t agitate for it.

Kerry have their own woes with the centrefield that troubled Dublin for so long missing David Moran, possibly for the whole campaign, and Brian Fenton’s tormentor-in-chief, Jack Barry, playing in Saturday’s junior club final, which also deprives Keane of Diarmuid O’Connor, an auxiliary in September.

It’s not an imperative for either side to win this but the visitors must remember what they let slip last September and that can lend sufficient urgency to the opening shots of this campaign.