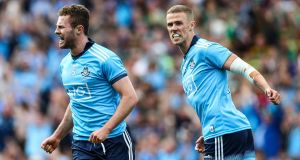 At the Dublin hotel the morning after last year’s All-Ireland final, Jack McCaffrey gave a long and completive interview to the gathered hackery, the sort that comes out as a well-earned purr of pleasure at the state of things.

It jarred a little when he pointed out that it was the first time he’d been on the pitch at the end of an All-Ireland final but you could tell by listening to him that even just that bare fact meant a huge amount to him. We think of Dublin as a monolith a lot of the time but everyone swims in their own little pool, always.

McCaffrey had been man-of-the-match against Tyrone. When he was asked on the Monday morning what he’d made of his performance the day before, his answer felt sound and intelligent in the moment.

“I think yesterday I figured out I’m actually a defender as opposed to some loose attacking player,” he said. “I left the shooting boots at home unfortunately. I really enjoyed it and to get a turnover in the injury-time period of an All-Ireland final and to feel the momentum shift around that was something I haven’t experienced before. It gave me immense satisfaction. I’d have to say that’s one of the best performances that I’ve ever put in.”

He finished the game with 1-3, the leading scorer from play all day. With the exception of the two free takers, he outscored everyone else on the pitch. Even take out his goal and the only other player to find three points from play was Seán O’Shea. On a day when Paul Mannion, Con O’Callaghan and Ciarán Kilkenny were all subdued, Dublin were badly in need of a loose attacking player. They wouldn’t have survived otherwise.

Oddly and unusually, it was a day when the Dublin sideline made plenty of missteps. It was a clear mistake not to move Jonny Cooper off David Clifford after his first yellow card, just as John Small’s fangs were blunted once there was yellow after his name. Small pulled out of a tackle early in the second half, leading to Paul Murphy’s goal chance. Getting sent off in the last two All-Ireland semi-finals was understandably in Small’s head, so it seemed strange not to take him out with a raft of All-Ireland winners on the bench.

But whatever about all that, their use of McCaffrey couldn’t have been more on the money. Dublin clearly wanted to make him the spare man for the day, knowing the Kerry were likely to pull Murphy back to protect the D. Whereas Mayo gave McCaffrey Paddy Durcan for company in the semi-final, Kerry seemed content enough to let him roam free. The consequences were devastating.

Never more so than for his goal after 18 minutes. Brian Howard was still returning to earth with Stephen Cluxton’s kick-out and McCaffrey was already approaching warp speed. There were 30 players on the pitch when Cluxton kicked the ball out, only five of whom were closer to the Dublin goal than McCaffrey.

Howard’s catch and two handpasses later, the Dublin wing back had blazed past all but three of the other 24 before sending Shane Ryan the wrong way with the shot. From kick-out to green flag, the move took 13 seconds. McCaffrey had been sprinting at full clip for 10 of them and still found a composed finish. It must have felt like being asked to filigree some bone china after doing 100 press-ups.

Later, when Dublin were listing ever so slightly, it was McCaffrey who got them out of the doldrums. Kerry scored the first two points of the second half, McCaffrey rattled off three of the next seven. On 42 minutes, he whistled in along the endline to fist a neat score from all of four yards out on an angle. He delayed and delayed, dying for someone to wriggle free inside so he could square it. But the Kerry marking was tight and he had to make do with a point.

Later, when traffic started to snarl up around the edge of the Kerry D, he appeared from the clouds a couple of times like a cocky jockey arriving late. For one, he used the not insignificant frame of Michael Darragh Macauley as a decoy to clip a point on the run with his right foot. For another five minutes later, he cut inside and dug one out with his left.

Left foot, right foot, handpass, goal. Or as it must be known from here on out, The Full McCaffrey.

4 Fabien Galthié cleared of any wrongdoing for leaving bubble