Kerry’s crucial misses, the sending off, another close call, and impact of the benches 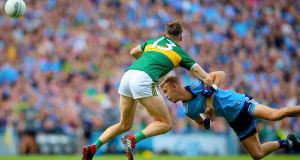 6’ Dublin 0-3 Kerry 0-1: Kerry started brightly but inside the opening eight minutes David Clifford had kicked three uncharacteristic wides and Paul Geaney missed a big goal chance in the sixth. He created the opportunity himself, but James McCarthy was on the line to keep it out.

12’ Dublin 0-3 Kerry 0-2: Jonny Cooper was adjudged to have fouled Clifford under a high ball in the small square. He did interfere with his run under the ball but that is a tactic Dublin defenders have been deploying (and getting away with) for years against big men inside. Geaney stepped up - and so did Stephen Cluxton - but his penalty was saved.

19’ Dublin 1-4 Kerry 0-5: Kerry led by a point and were gambling with a high press on Cluxton’s kickouts. Committing defenders to the Dublin half and forcing long restarts to swarmed zones. But Cluxton finally got one over the midfield, Brian Howard caught it and Dublin had a huge overlap. Jack McCaffrey’s pace took full advantage for a goal against the run of play.

35’ Dublin 1-9 Kerry 0-8: Clifford was fouled for the third time in the first half by Cooper. Turned on the edge of the D, Cooper was shown a second yellow card for what David Gough saw as a pull back. Dublin would have to play with a man less for more than half of the match.

41’ Dublin 1-10 Kerry 0-10: Kerry’s third missed goal chance, and Stephen Cluxton’s second superb save. Paul Murphy came on the overlap and let fly, Cluxton’s fingertips forced it on to the crossbar.

52’ Dublin 1-13 Kerry 0-12: In all of Dublin’s matches before the final, they had won one quarter by either six or nine points. Against Mayo they outscored the visitors 2-6 to 1-0 in the third quarter. On 52 minutes Kerry had survived that period - 0-4 apiece - and were bringing on Tommy Walsh. Tom O’Sullivan had also just survived a second reckless foul that could have easily resulted in him walking on a second yellow card.

57’ Dublin 1-13 Kerry 1-12: Tommy Walsh assisted 1-1, and scored a point himself, within a five minute period. His fellow substitute Killian Spillane scored the goal, with a brilliant direct run and precise finish into the bottom right corner. The Kerry bench outscored the Dublin bench 1-2 to 0-0. All in this spell.

66’ Dublin 1-15 Kerry 1-16: That man again, Spillane put Kerry ahead for the first time since Dublin’s goal in the 19th minute. David Moran grabbed the kickout and Spillane curled over from the left corner with his left peg. A tasty finish.

73’ Dublin 1-16 Kerry 1-16: David Moran was a colossus at midfield, but he was turned over on halfway in injury time, allowing Dublin to counter and Dean Rock to level the game with his 10th point.

77’ Dublin 1-16 Kerry 1-16: Rock lined up a free on the left sideline, 30m out, with barely enough space to make a run up. Last kick of the game, but it trailed wide. Only his fourth missed free all summer. We go again in two weeks lads.

GAA congress signals greater involvement of women in organisation 07:00
The sports fan would like to wake up now, thanks very much 06:00
Six Nations: Will Connors sets the backrow benchmark in Rome 06:00
Ken Early: Referees and VAR now thrust to centre stage 06:00
Craig Casey and Ryan Baird give a glimpse of Ireland’s future in Rome 06:00
Crossword Get access to over 6,000 interactive crosswords