Peter Keane: ‘Jaysus, it would be a lot worse coming out of here with a loss’ 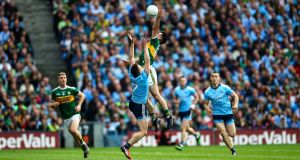 Kerry’s Jack Sherwood gets up above Dublin’s John Small during the All-Ireland Final at Croke Park. Photograph: James Crombie/Inpho

“A Kerry player,” says Peter Keane, “you are kicking ball against a gable of a wall since you are knee high. You want to play on a day like this, don’t you?

“You feel you are born for this, to get up to Croke Park, you want to be here on these days. Jaysus, it would be a lot worse coming out of here with a loss.”

How do you explain Gaelic football’s day of days – the GAA Super Bowl if you will – ending in stalemate and silence?

The American comedian pitchside at half-time got some cheap giggles when broadcaster Paul Collins asked how it will all pan out: ‘the team with the most points will win.’

Who is laughing now, pal? There’ll be no ticket for the replay on September 14th. Sport without a winner makes no sense to many millions around the globe. Not here. Despite attending the press conference, Keane’s thoughts are not available as he says less than Páidí Ó Sé used to when a recording machine flashed red.

“We could have won it, we could have lost it, I suppose Dublin probably feel the same. It’s like any draw, you take it and you go in and prepare for the next day.”

Allowing the All-Ireland final to finish without a winner is one of the last GAA anachronisms. Otherwise, they are on point. They even showed important replays on the big screen, yet the fact remains that the throng of navy, blue, green and gold coloured bodies filed out with some relief, a little regret, but mostly emptiness.

The poor American. How can this be explained to him? What will he tell his fellow Americans?

There is nothing to be done but ask Keane about the remaining twin tower from the last great Kerry era. Tommy Walsh arrived and showed for ball and the five-in-a-row dramatically slid from Dublin’s grasp.

“We got a good bounce out of our subs today,” he agrees. “You know, Tommy is one of those guys. He had two shots, scored one, missed one but he set up another one. He’d a good day.”

Walsh did kick a bad wide but showed enormous courage to land a point before creating Seán O’Shea’s equaliser on 61 minutes. Sam Maguire smiled as a winter winding around the Kerry Way appeared in the mind’s eye.

“I wouldn’t say it was an opportunity missed. We haven’t been in an All-Ireland final since 2015. What are they going to get only experience out of the game. I said all year we are on a crash course and this a learning curve, this is only helping it.”

The Kingdom have their man at the tiller. Efforts by local reporters to create an adversarial situation via the ‘we had no hope’ narrative is met with less information than we had before the day began.

There is a protest.

“I’m not specifically talking about you. I’m talking in general. Point being, we wouldn’t put a whole lot of emphasis on that. We are just thinking about ourselves.

“They’ve won four All-Irelands on the bounce. Going for seven in the last nine years. They didn’t get those All-Irelands in a lucky bag, they are a serious team.”

“Did we think we had a chance coming here today? Of course we did. Two dogs in any race, one of the dogs might get a heart attack and the other lad would walk home. You’ve a chance every time you are up here.”