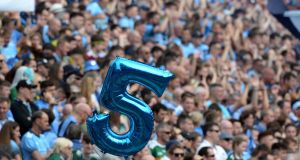 Some of his kick-outs a little off target, yet his two crucial saves unquestionably kept Dublin in the game, his brilliant left-handed stop on Paul Geaney’s penalty in the first half, his fingertip push on Paul Murphy’s shot in the second. Commanding as ever. Rating: 8

Generally reliable, only short of some probing forward runs of late, got turned over by the strongly influential Tommy Walsh for the Killian Spillane goal, with some further spillage at times. Room to improve. Rating: 6

His reputation as Dublin’s best defender severely damaged, fouled David Clifford for the first-half penalty, two more fouls on the same player ending his game just before half-time. Will be out to make amends in the replay. Rating: 2

Kept his pace and position throughout when others around him faded, moved onto Clifford in the second half to good effect, also fed plenty of ball into the forward line, not all of which was made to count. Steady as ever. Rating: 7

Phenomenal. Ran riot with a ridiculous amount of possession and passes, his apparent freedom on the field resulting in 1-3, three points from play in the second half. Also made that telling tackle on Stephen O’Brien in the second half to deny Kerry a goal. Man of the match. Rating: 9

Made a telling intervention early on with the goal-line block on Geaney’s shot after Cluxton was beaten, but struggled to exert his usual influence of the field as the game progressed, especially as Tommy Walsh tore into the game. Won’t be content. Rating: 6

Once again something a liability in the defence when at times his discipline let him down, also made that openly poor first half shot at goal with drifted aimlessly wide. Definitely one of the players Jim Gavin feels will need to improve. Can he? Rating: 5

Strangely anonymous and absent at times, still kept in the head in the second half when it was needed, but well short of the attacking power which saw him hit 3-8 from play already this summer. His worst All-Ireland final performance for sure. Rating: 6

Also caught for pace and possession around midfield, especially with David Moran commanding the sky, his work-rate was tireless nonetheless and not surprisingly the first Dublin player to be called ashore. Rating: 6

So often one of the unsung playmakers of Dublin’s game and scorer of that match-defining goal in last year’s final against Tyrone. Scully laid off the pass for McCaffrey’s gaol here, but failed to make a telling impact throughout and was replaced late on by Kevin McManamon. Rating: 6

Worked himself into his usual scoring positions but struggled to make them counts thanks in no small part to the close attention of Tom O’Sullivan. His first half point was finished with great power after Ciaran Kilkenny played him clean through. Still, more muted than anyone expected. Rating: 6

Dublin’s best player on the field along with Jack McCaffrey, put in a terrific shift, winning the kick-out that resulted in Dublin’s goal when they needed it most. Pure exhaustion saw him replaced by Diarmuid Connolly. Could have been their match winner. Rating: 9

Looked a little off balance at times and his radar did too, kicking two first half wides to go with his two first half points, and definitely struggled with the close attention of Tadhg Morley before being replaced by Cormac Costello. Will be hungry for the replay. Rating: 6

Immortality beckoned, only in truth his late minute free to win the game for Dublin, off the left sideline, was one strike too far. The Ballyman man was otherwise excellent in his choice and execution of shots in front of goal, his 0-10 including six frees. Three beauties from play also. Rating: 8

Well marshalled by Gavin Crowley, but never gave up the chase or the hunt, one of the players to show up for possession in injury time when Dublin needed it most, still held scoreless nonetheless. Played a hand in McCaffrey’s goal, but would have wanted more. Rating: 7

Management: The decision not to move Jonny Cooper off David Clifford may well have proven historically costly, and while other changes seemed a little slow, Eoin Murchan certainly injected some welcome pace. Rating: 6