Glory days of blazing camogie finals well and truly over

No goals, points from placed balls and two teams who know each other too well 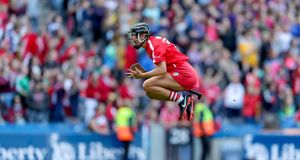 Camogie can’t keep having finals like this. For the second year in a row, Cork beat Kilkenny by a point in a tight, nervy game where no goal was scored and the overwhelming majority of the points came from placed balls. Orla Cotter and Chloe Sigerson landed a free each – both questionable – in the dying minutes from opposite sides of the pitch to buy the reigning champions a 0-14 to 0-13 victory in front of a crowd of 21,467. Cork won’t care how it was done, only that it was.

But for the sport as a whole, this felt like another dip in the graph. After a few years of blazing finals around the turn of the decade, the showpiece of the sport has become a dreary day out for all concerned. Kilkenny and Cork know each other’s game to the last chain of their respective DNA – this was their third final in 12 months including the league decider and each of them has been decided by a single point.

Any excitement suggested by such small margins was offset here by a game that never got into any sort of rhythm. Referee Eamon Cassidy had a day where he seemed to be involved in almost every passage of play – it looked inevitable from a good distance out that the result would be decided by whichever team managed to draw a free when the game was on the line. When Cotter went down under an imperceptible touch in the 71st minute, she didn’t need a lot of dusting off to ready herself for the clincher.

“I’ve had a look at it in the dressing room with our stats people and, without criticising Eamon, definitely Orla was already falling,” said Kilkenny manager Ann Downey afterwards. “Our players were around her but hadn’t touched her. I thought it was a harsh enough free as you saw from my reaction on the line.

“I thought the free against Davina [Tobin, a minute earlier] as well – there were two hard calls on us. Eamon will have to look at his own performance and judge himself, I’m not going to give out about him. It is what it is. It’s not going to change the result, we have to be able to take it on the chin and move on.”

Though the crucial frees went against Kilkenny at the end, you wouldn’t say Cassidy favoured either side. In his defence, it was a game refereed to the absolute letter of the law.

Camogie is, in rule, a non-contact sport and at times it didn’t take a lot more than a dirty look to find yourself whistled up. It made for a frustrating game, stop-start and bitty throughout.

“Look it, we can all talk about the refereeing of camogie,” said Cork manager Paudie Murray afterwards. “Does it need to be tidied up? Yes, it does. I’ve said that a number of times. I think the way the rules are at the moment makes it impossible for a referee to referee the game.

“Eamon Cassidy is probably one of the top two referees in the country but there is so much in relation to the contact area, what is a free, what isn’t a free, that it’s next to impossible [to judge]. If a player charges with a shoulder, it’s just impossible. I don’t think it’s going to change too easy.

“I think they have to – and I’ve said it before – that the rules have to change and go more towards the hurling and let contact be there. I certainly would think that the majority of players I have spoken to would be in favour of that and I think then you would have more of a flow to your game. We sit down with our players and talk to them about what they should and should not be doing and we try to train for it but it’s next to impossible.”

Of the 27 points scored in the game, 0-18 came from placed balls. Cork took just six shots from play across the whole afternoon. The quality of the free-taking was terrific – Cotter, Sigerson and Kilkenny’s Denise Gaule were the game’s outstanding players as they potted balls from all distances and angles.

Ultimately, Cork had more threat from open play. With both sides setting up defensively and stringing five across their half-back lines, forwards were starved all day. Katrina Mackey and Amy O’Connor swished a couple of points each whereas the Kilkenny inside line was easily outnumbered by the massed Cork defence. It meant Gaule had to carry the bulk of the scoring burden for Kilkenny and when the late calls went against them, they couldn’t muster an equaliser.

“We knew it’d be a tight game from start to finish,” said Cork veteran Gemma O’Connor after winning her ninth All-Ireland medal. “The championship has been quite open but we knew the final would be so defensive, we don’t give each other an inch. I don’t know what way it is to look at, sometimes you’d wish the play would open up a small bit, but you just want to win at all costs, that’s the bottom line.

“Sometimes you’d like the game to be a bit more free-flowing, that would only do wonders for the game. I think he [the referee] did stop-start it a bit too much. But look, we’re on the better end of it, I can’t complain too much.”