Gemma O’Connor: ‘I just feel I have another bit to give’

Cork star not ready to call it quits, and is savouring another final against Kilkenny 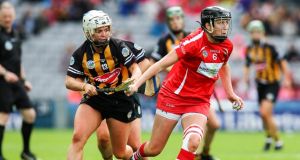 When Gemma O’Connor took to the field for Cork in last year’s All-Ireland camogie final, just three weeks after sustaining ligament damage to both an ankle and a knee, probably the person least surprised by her appearance was Ann Downey. The Kilkenny manager had smiled when she was told O’Connor had been ruled out of the game. The “warrior”, she said, would play, “unless she’s after losing a leg”.

It hadn’t been complete Cork codology, though. O’Connor’s manager Paudie Murray and her team-mates didn’t doubt her determination to make the final, but the medical advice was that she’d be in no fit state to play camogie for at least another six weeks, so a Lazarus-like recovery would be required.

Which is what O’Connor produced after three gruelling weeks of rehab, taking time out from the Army, with which she has served for 15 years, to focus on getting herself at least fit enough to contribute to the cause.

And not only did she play the full game, she provided its most magical moment, equalising with a point from the halfway line just when it looked like Kilkenny were going to beat Cork in the final for the second year running. It was only when Julia White got the winning point for Cork at the death that the pain of her injuries began to envelop O’Connor; for the previous 70 minutes she’d blanked it all out.

“When your body feels beaten,

when your legs are burning,

when your arms are heavy,

when your eyes are stinging,

it’s your mind that pushes you on.”

So says O’Connor in the video she has made for Liberty Insurance’s promotional campaign for the game. It was your mind that pushed you on last year?

“It was. I just had to put it to the back of my head and get on with it the best I could. And the way the game ended, moments like that are the reason you play. It’s a memory to cherish, and those memories drive you on through the bad times.”

The victory, in her 13th final, gave O’Connor her eighth senior All-Ireland medal and led to the 10th All Star award of her career, more than any other camogie player. At 32, it seemed like the perfect point to bow out.

“And I did think long and hard about it,” she says. “You give up so much and every year it gets harder. Your family, your partner, everybody suffers out of it. You can’t go on holiday, you can’t enjoy yourself at family occasions, when it’s 10 o’clock at a wedding and everything is getting going, you’re the one who’s leaving. And the people around you have to make sacrifices too because of it.”

“So I totally understood why Rena finished up,” she says of Rena Buckley, her longtime camogie comrade, “especially when she was playing football as well, her commitment the last few years was phenomenal. We grew up together on the field, Rena had always been there, especially in the last few years when she was always behind me at the back. I just thought, ‘Jesus, it’s all going to be so different now.’

I’d like to think I’ll keep playing for as long as I can, we’ll see how it goes

“So I talked to my family and my partner Aoife, especially to my brother Glenn [a former Cork senior hurler]. He was saying this is the perfect time if you’re thinking about going, after the win and the type of win it was. I thought about it, but I just felt I had another bit to give. I suppose you try to play for as long as you can, you’re playing not only for yourself, you’re playing for your family and friends too. It just means so much to me, and more than anything I just love it. I’d like to think I’ll keep playing for as long as I can, we’ll see how it goes.”

She’s back in another final, then, and for the third year running Kilkenny are the opponents.

“We enjoy playing each other, it’s always so competitive, when you break it down there’s probably not much between us. There certainly wasn’t last year. It’s been a huge rivalry through the years, there’s a lot at stake, county pride. I was talking to some of the past Cork players last year, like Fiona O’Driscoll and Denise Cronin, and they were saying how special wins over Kilkenny are, it means so much to Cork camogie when you beat them. It’s very intense out there, sometimes there’s no love lost between us. On the All Star trip this year it took a while for us to relax around each other. But at the end of the day, both sets of players just want to win – at all costs.”

O’Connor played in her first final as a 17-year-old back in 2002, Cork beating Tipperary that day. In 17 years, then, she’s reached 14 finals. It’s a remarkable record, but, she says, the novelty never wears off.

“It’s funny looking back at the first one, at 17 you’re almost in awe of what’s happening, but at the same time you have a carefree attitude. You’re fearless. As you get older it’s not that you begin to worry a bit more, it’s not that you’re suddenly full of fear, but your thought process changes, you feel there’s a bit more at stake. And you might always be wondering if this is your last. But the feeling never gets old, no matter how many finals you’ve played you always feel fortunate to be there, you don’t ever take it for granted.”

The last two finals alone demonstrated what a rollercoaster of a journey it has been for O’Connor. There have been considerably more highs, but being sent off, after picking up two yellow cards, in the 2016 defeat to Kilkenny, their first All-Ireland win in 22 years, was the lowest of lows.

“The contrast between those finals is unbelievable, really. It was just complete and utter dejection after being sent off and losing in 2016, I was broken-hearted by it. But then a year later you come back and emotionally it just couldn’t have been any different. You’re very fortunate to win All Irelands, but I also remember the ones I lost. You don’t bury yourself in them, but you try to learn from them. You’ll never be the finished product, you keep on learning.”

Gerry Thornley on the joys of winter rugby; remembering Stephen Roche’s 1987 Tour de France
Here is your handy guide to sport on television this week

1 College football turns blind eye to Covid-19 by risking players' health
2 Rugby impasse continues as no deal reached in fourth round of IRFU salary talks
3 Nadia Power determined to push on to the next level
4 Seán Moran on GAA’s impending civil war; remembering when Ken conquered the world
5 The Best Of Times: Harrington stares down Garcia in epic Claret Jug battle at Carnoustie
Real news has value SUBSCRIBE