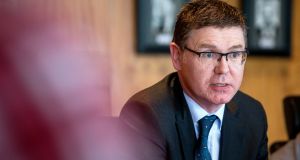 Tom Ryan: “On the training side of things it’s a little more difficult because you may have different counties taking different approaches.” Photograph: Gary Carr/Inpho

The GAA says that whereas it is open to any proposals for assisting counties with their financial burdens, the payment across the board of travel and catering costs for all counties mightn’t be the ideal vehicle for doing so.

That proposal arose from the statement released by Kevin McStay last week when he was stepping down as manager of the Roscommon footballers.

“In fairness,” he says, “it wasn’t my idea but arose from the county executive as an interim measure or immediate response while the whole issue of funding was being looked at.”

Behind the idea is a dual purpose, the alleviation of the strain on especially smaller counties and an equalisation measure, given that Dublin wouldn’t have those costs or certainly not to the same extent.

Tom Ryan, the new GAA director general, was formerly the association’s chief financial officer. He acknowledges that there is merit in the Roscommon idea.

“I can see it as an issue but also as a non-financial issue when you consider players arriving at training after a two-and-a-half hour drive after a day’s work or college.

“We do meet travel costs and accommodation costs for matches so I suppose the principle is there that we do acknowledge that there is a cost that people bear and we try to help with it but the match is a context that’s clear and understood and there’s an obligation to approach matches in the same fashion.

“On the training side of things it’s a little more difficult because you may have different counties taking different approaches to things in terms of the number of sessions being conducted. I do accept that there’s a point there in trying to assist those at one end of the resources spectrum to a greater extent than those at the other end.”

The national leagues in football and hurling are both based on a redistributist model with 20 per cent going to the home county for administrative costs, a further 20 per cent to each of the competing counties as revenue, 11 per cent to insurance and injuries funds and the balance into a pot that is shared with a bias towards the counties with the smallest gate receipts.

In this newspaper last January, Malachy Clerkin and Eamon Donoghue analysed the numbers in county panels living away from home. Roscommon footballers had the highest total, 27 in all, 21 in Dublin and six elsewhere. Even taking hurlers into account, only Tipperary had more players resident outside of the county.

“How that manifested itself for us,” according to McStay, “is that we had at times three eight-man taxis and never less than two coming from Dublin as well a single taxi coming from Templemore or Limerick. Roughly that’s €300 per vehicle so you’re talking the guts of a grand per night, four grand per week and we were out 30 weeks. So it’s about €100,000 you’re talking about.

“Then there’s the catering side. For players travelling from Dublin you’re talking about an eight-hour commitment and so they have to get a proper meal after training. By the time you’ve fed everyone, the bill was about €500 per night, two grand a week.”

Ryan wonders whether this proposed reimbursement would be the best way of addressing funding issues for counties like Roscommon.

“I think there are probably a few other strategies you could look at before this,” he says, “both in terms of the impact they might have and how practical they might be. We’re always aware of the need to analyse and redress imbalances and the most effective ways of doing it.

“For instance there is the question of assistance to provide a centralised training facility. We have consulted with counties and asked them, particularly those at the less well-resourced end, to submit plans to us for what they would like to do had they some additional funding and we’ve made it available for things like extra coaching in counties.

“We do pay at the moment about 20 per cent of the counties’ mileage costs and that’s across the board.”