Meeting Kieran Donaghy - the greatest underdog of them all 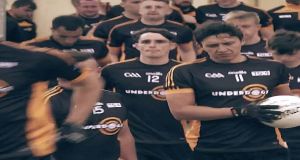 The ‘Underdogs’ head out for their first match in Kiltoom, Co Roscommon.

TG4’s Underdogs series follows the journey of some of the best club players from around the country as they prepare to take on a county team. To be eligible players (over 18) must have never previously played intercounty senior championship football. Episode two is at 9.30pm on Thursday . . .

Making the initial Underdogs squad was a nice achievement, a relief even. Just like watching the first episode last Thursday and getting through it without any cringey moments.

Leaving Abbotstown though with that box ticked off, the focus switched right back to nailing down a starting jersey for when we play a top county team live on television. That’s been the target from the off and I expect it is the same for the rest of the players too.

The structure of the Underdogs journey so far is to bring the squad to various locations for a number of three-day camps, with each ending in a challenge match. So the aim is to get yourself on the team and stay on it – improving camp on camp with the selectors’ advice and the collective and individual training we’re accumulating.

In many ways it’s not ideal, playing a match after two days of training and other activities. Fortunately for me it hasn’t clashed with my own club commitments, but for others it has been a fine balancing act. Weekends off aren’t a luxury sports journalists are afforded too often, so with many of the camps running midweek it’s suited me. But I’m certainly in the minority in that regard.

At the same time, as a team we have got to know one another very quickly, and after three days of football the skill levels rocket.

For a Roscommon man I didn’t have far to travel for the opening match, taking on the team who have dominated the football landscape in my county for the past 15 years. There’s just no getting away from St Brigid’s. First though we were put through our paces in a fitness assessment in AIT.

Having been involved in county squads from age 14 to 21, one of the biggest challenges in coming away from that environment is having to assess yourself. Regardless of all the reading you do or all the questions you ask the lads who are still involved, putting together an individual training plan is plain and simple guesswork for the large part.

Most clubs in the country will have fitness tests at some point in the season, they’ll often be quite basic, the results are of little importance and retesting is very rare. It’s hard to gauge any results you do get as there are such a range of fitness levels in a club dressing room, but either way a generic programme will be drawn up and off you go.

Personally I came in to these tests aware I’d match any player in terms of strength and endurance, and would always do just fine in the rest.

Being compared to county averages however means that ‘just fine’ in the rest isn’t fine at all. Former Sligo forward David Kelly, (lecturer in Exercise Science) and his team at AIT, sat down with each of us for about 15 minutes to go through our results. Individual alterations were made to a programme focused on building explosiveness, and we left with a clear outline of where we stood and what we needed to work on.

So for the past few weeks my non-training days have been filled with working on this programme and developing the ball skills the selectors have been highlighting.

Eating right is much the same. The last few proper instructions I’d got in this regard was back in DCU, about four years ago. So speaking with former IRFU performance nutritionist Nora Ní Fhlannagáin was incredibly beneficial. She was hit with an avalanche of questions (it was peak summer in fairness) and nearly had to be escorted out of the room. I was asking most of them.

The wisest words we’d hear all weekend however came from the greatest underdog of all. Kieran Donaghy made his name in the show back in 2004, playing at midfield as the Underdogs beat his native Kerry. Two years later he was Footballer of the Year and he retired on Tuesday with four All-Irelands and three All Stars to his name.

Fortunately, with this job, I’ve had the pleasure of talking to many successful sportspeople, but this was very different.

You could tell Kieran really wanted to be there with us, to drive it into this group how big an opportunity we have, and how important the small details will be in reaching our goals. The “one per centers” as he calls them.

The prevailing message was – do the work so you can look yourself in the mirror on matchday “and then just cut loose”.

His words were special, and him just being there was a very real reminder of the power of the show. He was, after all, sitting in our place once upon a time.