Super-hot Tyrone give Roscommon a roasting in opener 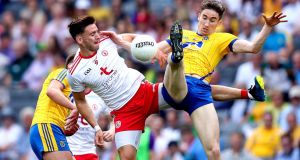 For all the novelty of this first ever Super 8s championship match things turned out to be super easy and super straightforward for Tyrone. One down, two to go, and half the battle already won in making the All-Ireland semi-finals.

Roscommon will be – and pardon all these puns – super disappointed, and in truth were super relieved to hear the final whistle. Tyrone had run away with it at that stage, while everything was going from bad to worse for the beaten Connacht finalists.

For too long and too often Roscommon simply played into Tyrone’s hands, and sent plenty of loose ball that way too. Given the importance of winning your first game in the Super 8s, and the consequences of losing it, it was everything Tyrone wanted. And with scoring difference possibly coming into play their 18-point winning margin, double the difference in the end, could serve them well if needed.

On a suitably super hot evening in Croke Park, Tyrone were more than double scores up at half-time, 1-10 to Roscommon’s 0-6, and no more than they deserved. In true Tyrone fashion they quickly turned from hunted to hunter, and began to kill the game off as early as the 12th minute when Niall Sludden fired home their first goal.

It came directly off a Roscommon mistake, Enda Smith fumbling the ball around midfield, and two quick hand-passes later, Sludden carved through the Roscommon before shooting low and neatly past Colm Lavin.

Roscommon briefly rallied because they needed to, still spreading themselves thick and thin to make the most of Croke Park. Frees from Diarmuid and Ciarán Murtagh in quick succession got them back to the minimum, 1-4 to 0-6 on 22 minutes – but that was short lived. Tyrone had them where they wanted to be, in retreat and spilling ball, and ready to pounce on every mistake.

Two second-half goals were pure consolation for Roscommon, Smith giving himself some redemption when cutting loose from the right side of the Hill 16 end three minutes into the second half, and burying past Niall Morgan. Ciarán Murtagh added a second goal on the hour mark but by then Tyrone were in cruise control.

A penalty from Peter Harte and two more goals – the first from Conor Meyler, the second from Richard Donnelly at the death – meant Tyrone finished with 13 different scorers in all, each one as easy and free as the next. Colm Cavanagh was typically industrious and they counter-attack proved impossible for Roscommon to handle.

Both Enda Smith and Donie Smith certainly had better days, and they’ll need to the next day. With a quarter-final record bettered by none other than Kerry and Dublin, Tyrone are a team well used to this stage, and seemingly suited to Super 8s too.

No resting on their laurels or regret for either team. Tyrone welcome All-Ireland champions Dublin to Omagh next Saturday, while Roscommon host Donegal. A super start for Tyrone however.

1 Dave Hannigan: Notre Dame’s Fighting Irish leprechaun needs its ass kicked
2 Trick or treat: Ireland set for Halloween showdown with France in Paris
3 Sonia O’Sullivan: Running in a bubble as the shoe wars raged
4 Katie Taylor out to banish all doubts in rematch with Delfine Persoon
5 Leeds go back to the summit after impressive win over Stoke
Real news has value SUBSCRIBE

Leeds go back to the summit after impressive win over Stoke 19:32
Holder shines with the ball as West Indies take control against England 19:23
Club rugby to start back from September 12th on regional basis 18:32
Katie Taylor out to banish all doubts in rematch with Delfine Persoon 17:56
Trick or treat: Ireland set for Halloween showdown with France in Paris 17:29
Crossword Get access to over 6,000 interactive crosswords