GAA Statistics: Are intercounty referees as fit as your club team? 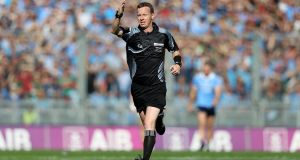 Intercounty Gaelic footballers and hurlers are covering more ground at a quicker pace than ever before. Trying to make sure they do so while playing safely within the rules is the GAA’s panel of referees.

These intercounty referees (18 football and 10 hurling) are required to have the aerobic endurance fitness levels of an adult club player. Otherwise they are prevented from officiating at the top level.

Over the past eight years the testing and fitness training of GAA referees has gone from next to nothing to a partnership with Dublin City University, which has resulted in dramatic improvements in performance.

Intercounty referees are tested via the Bangsbo intermittent recovery test – with the scores registered reaching as high as level 20.2.

The Bangsbo consists of 2x20m shuttle runs at increasing speeds, interspersed with a 10-second active recovery – all controlled by audio signals and each completed run marks a new level. Failure to complete a shuttle results in a verbal warning, while a second failure results in a withdrawal. This is currently the most widely used fitness-testing method with intercounty and club teams.

In order to referee in the national league a minimum level of 16.8 must be reached, whereas any referee who takes charge of a championship match has recorded scores of at least 17.4.

The average level recorded for an adult club player ranges between 17.1 and 19.1 depending on the standard of the adult team – from junior teams to top senior clubs.

According to Athlone Institute of Technology’s department of sport and health sciences, the average level for an intercounty team in the Bangsbo test is 20. A testing of the Dublin senior footballers at the end of Pat Gilroy’s tenure resulted in an average of 20.1, with the likes of Michael Dara Macauley and James McCarthy back then recording scores as high as 22 and 23.

Aidan Brady, a PhD student at DCU under the tutorship of Prof Niall Moyna, has designed a winter training schedule for the referees, and the pair also carry out a number of regular training sessions with the championship panels during the summer.

“The fitness levels of these referees has improved dramatically over the past decade,” says Moyna, who is also the DCU Sigerson Cup manager. “Even their body shapes, and definitely their preparation. Croke Park have been taking it a lot more serious. Fitness, of course, is only one aspect, but they are making a huge effort. Some of these lads are in their 40s and early 50s, and some of them are getting very high scores.

“There are marathon runners among them, and they do have a good fitness level. Most of the training we do is low intensity. They need to be able to recover quickly and go again, because when they are refereeing they have no control over their recovery. They wouldn’t have near the maximum speed of players, but that’s not as important for them.

“We started from zero eight years ago, and we decided to use their own data to form norms and targets, and they are putting in a huge effort to raise those year on year.”

To help build up a record of performance and following on from that to design specific training programmes, referees are tracked using GPS units in all senior championship games and most national league games.

Those results – which have already been improved upon as the season has progressed from league into championship – suggest an improvement on last year’s championship averages. The average distance covered in last summer’s hurling championship was 9.64km, and 9.80km in the football.

Ongoing testing in Athlone Institute of Technology has recorded an average distance covered by club players of 8.7km (60 minutes in club matches rather than 70 for intercounty). The figures recorded vary, of course, from inside forwards to midfielders who would often be hitting the 10km mark.

“Fitness is only one component,” says Moyna. “One of the things we are measuring at the moment is decision-making in relation to fatigue. Some referee’s mightn’t have great fitness but can still be excellent under pressure. But when referees are less fatigued it’s easier for them to make the right decisions.”