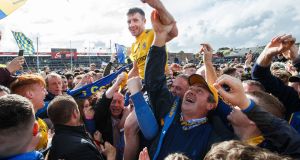 Forewarned is forearmed and yet as the rain fell and the pitch became splashy and all sense was squeezed from this cold June day, Roscommon completed a second ambush on Galway in just three seasons. And there was nothing the home team could do about it.

This was not the prettiest of Connacht finals and its outcome that gave the locals plenty of cause for grumbling around the pubs of Shop Street on Sunday evening. But: what a result for Roscommon. Their glory lies in their stubborn refusal to ever accept their place as the third county in this jurisdiction. First Mayo and now Galway felled. Both victories on the road. Contrary to the last. Whatever you say they are, that’s exactly what they’re not.

Roscommon had every reason to believe this was a step too far. Not only were they down by five points at the break, they were floundering against Galway’s grip in the middle third and thoughtful attacking moves. Afterwards, Anthony Cunningham was coy about what was said at half time but attributed the startling revival to the most basic characteristic.

“Tremendous courage. I think you’d have to use the word courage. They really went for it. It was looking a bit rocky there at half time. We asked them to just play with a bit more intelligence on the ball.”

And they did play clever, with Niall Kilroy making space to kick a 38th minute point before Cathal Cregg shattered the Galway cover with a lung bursting solo-run and hand-pass for Diarmuid Murtagh to somehow slide home the goal that threw reason on its head. From that moment, Galway became the hunted.

A Murtagh free gave Roscommon a 1-8 to 0-10 lead after fifty minutes and they won the remainder of the contest by 0-5 to 0-2. David Murray denied Ian Burke any space or time to exert his creative magic but as the game wore down, Galway’s attacking structure became more fractured and isolated anyway and they seemed as mystified as everyone else by different the terms of engagement had become.

From morning time, the weather was intent on dominating the day. The one blessing of the low sky and heavy rain was that it killed the usual Salthill breeze- at least for a while. Through the rain and surface water, both teams somehow conspired to exchange a series of high quality points through the opening quarter. Conor Cox screwed an outside of the boot left foot score in the 11th minute.

For Galway, Antaine O’Laoi twice found the range in the congested Roscommon defence and after 17 minutes, the scoreboard read 0-5 apiece. But by then, Galway had begun to get to grips with the challenge. The pressure had already told on Roscommon, as Darren O’Malley struggled to see anything like a clear option on his restarts. Galway pressed up boldly, limiting the short option and then going to town on anything fired towards midfield.

Midfielder Fintan O’Curraoin was warming to the occasion and struck an effortless 10th minute point but his luckless injury streak continued when he was forced to limp off before half an hour had been played. Gareth Bradshaw mixed a sweeping role with a series of direct runs through Roscommon’s middle-third defensive cover and they moved the ball smartly for the most part, setting up Eamonn Brannigan and Shane Walsh for scores which eased the home team into a 0-10 to 0-5 lead.

All of 22 minutes passed without a Roscommon score. It was all going swimmingly for the favourites.

But minutes after the restart, Galway found themselves in a completely new environment. It was as like a crowd at the opera settling down after the interval only to be confronted with Megadeth on stage. Now Roscommon pressed up; now Shane Killoran and Tadhg O’Rourke took hold at midfield and now the visitors had all the possession, all the options.

That lightning 1-2 caused Galway to freeze: to just stop. And for the rest of the game, they were responding rather than creating. Too many of their players became distracted by minor squabbles while Cox and Cregg and Niall Daly became central figures as Roscommon thrived on Galway’s increasing uncertainty and desperation.

Galway looked lost: an ambitious shot from Shane Walsh tailed wide; Michael Daly landed a comparable beauty in the 57th minute but the mere ambition of those shots spoke of the dire straits in which they had somehow landed.

O’Curraoin’s departure had further weakened Galway’s centre field options but afterwards Kevin Walsh refused to turn to the squad’s injury list in trying to make sense of the match. It came down to a fundamental inability to get their hands on the ball.

But the ease with which Roscommon attackers skipped through the Galway cover in the last 20 minutes was eye-opening, too. Galway’s defensive solidity has been painstakingly built. The shape was evident here in the second half but the sharpness and intent just disappeared. It was a big setback and leaves Galway just three vital weeks to salvage what has been a miserable weekend for their flagship GAA teams.

Roscommon, though, march on to the Super 8s. Punching above their weight is the only way they know how to box.