Rebels go on to All-Ireland series despite five-point defeat in Ennis, Clare are out 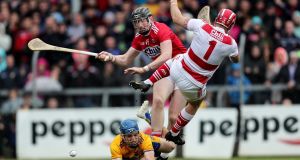 Clare came out on top over Cork by five points at Cusack Park, Ennis on Sunday but it still wasn’t enough to stay in this year’s championship after Limerick’s loss to Tipperary in Thurles, the Leesiders go on to the All-Ireland series.

Clare went into the final game of the round-robin series on the back of two poor performances against Limerick and Tipperary but still had the chance to qualify if results went the right for them.

From the off, it was evident that those two big defeats had hurt. The game started in a whirlwind fashion with Clare’s Shane O’Donnell finding the back of the Cork net after just 17 seconds. Aidan McCarthy added a point before the game was even a minute old, before Cork talisman Patrick Horgan goaled at the other end on 90 seconds.

The pace of the game early on was ferocious, with both sides exhibiting tremendous hunger and commitment. Clare led 1-3 to 1-2 by the seventh minute and could have been further ahead if O’Donnell’s flick hadn’t gone inches wide of Anthony Nash’s goal. The sides were level on 19 minutes but two valuable Clare points, a free from Peter Duggan and Colm Galvin from play, opened up a small gap.

The hosts then hit three more in a row through Duggan (two) and full-forward John Conlon to push out the lead to five. On 35 minutes, a Donal Tuohy puck out was caught in the half-forward line by Duggan. The lanky Clooney-clubman fed Tony Kelly and the former Hurler of the Year blasted to the Cork net to put the home-side 2-10 to 1-6 ahead. Cork responded in injury time before the break with a pair of Horgan pointed frees leaving his side five points adrift at the whistle.

Cork introduced two substitutes at the beginning of the second half, with Damien Cahalane coming in at full back, while Stephen McDonnell replaced Robert Downey in the half-back line.

Clare for their part, brought Ryan Taylor in at midfield in place of Aidan McCarthy.

The fiery nature of the clash – which had earlier seen Clare joint -manager Gerry O’Connor sent to the stand – saw a big dust up in the Cork square before the throw-in, involving a number of players. The outcome was that two players were yellow carded – Clare’s Kelly and Cork’s Cahalane.

John Meyler’s men had a better opening to the half firing over four early points before a Duggan free for Clare put two between them. O’Donnell proved to be a thorn in the Cork defence once more but a goal attempt was expertly saved by Nash in the Cork goal.

A torrential downpour featuring thunder and lightning threatened to mar the game as a spectacle, but the superb intensity of the game continued despite the difficult and almost dangerous conditions.

Clare kept their noses in front for the remainder of the game with some well taken points by the likes of Galvin and Diarmuid Ryan while Cork relied on Horgan’s free-taking to keep them in the hunt.

With about six minutes of normal time remaining, Clare held a four-point advantage. But Horgan finished to Tuohy’s net from the edge of the square to set up a frantic finish. In the end though, Clare held sway and a pair of injury-time points by substitute Cathal McInerney sealed the victory.

In spite of the Clare win, Clare team captain Patrick O’Connor looked a picture of dejection when speaking to the assembled media moments after the game. Asked if he was proud of the performance replied, “Yes. You can only look after your own place really. We never like to be in a position that you need someone else to do you a favour,” he said.

Referring to the last two defeats, added: “While we saw a lot of pain and hurt we are sorry that it took that to produce this performance. We would like to think that performance today, answered a few questions about us.”

Cork manager John Meyler said: “We qualified in the top three in Munster and that was the objective. But we have a lot of work to do after that. I’m just disappointed with the performance today.”