Davy Fitzgerald: ‘If anyone thinks Leinster has been off, they’re off their rocker’ 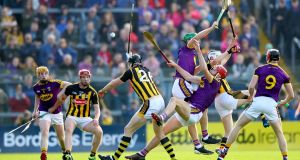 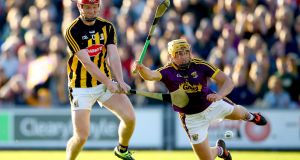 Kilkenny’s Adrian Mullen scores his side’s opening goal despite the attempt of Damien Reck of Wexford to block his shot during the Leinster SHC round-robin game at Wexford Park. Photograph: James Crombie/Inpho

We were asking Davy Fitzgerald what making the Leinster final meant to Wexford when Rory O’Connor came at him from behind and smacked a kiss on the side of his face.

“Man, like, jeez, it’s just great,” Fitzgerald said, slightly blushing. “Massive for Wexford. This is my third year, and I’m very sentimental towards these guys, the respects they’ve shown me is huge.

“There was so much on the line here, and I’ve heard it said the hurling championship has been a little off this year, but if anyone thinks Leinster has been off, they’re off their rocker. It’s been unbelievable hurling, from every team.”

We were asking Brian Cody the same question, about what it meant for Kilkenny to be playing Wexford again in two weeks’ time, when he simply threw his eyes up to heaven.

“My only reaction is that we’re there, whoever we played was fine with me,” said Cody. “After any draw, you think it’s possible either team could have won. But it doesn’t matter now. We’re where we want to be, happy to be where we are. That’s it.”

That was just after the realisation the end result here on Saturday evening was enough to send both teams into the final. Something about the wild, wild rivalry between these teams keeps drawing out the best from each other and if they fought this one as if their season depended on it that’s because it did. Had either team lost they were gone – 15,241 in attendance to bear witness.

It started and ended in a crossfire hurricane and in the final clearing they were still level. With four big wheels of the Leinster hurling championship still in spin, the end result here would also be heard beyond Innovate Wexford Park. Dublin beating Galway 150km up the road in Parnell Park ended their season, as Wexford, Kilkenny, Dublin and Galway all finished on five points; on scoring difference Wexford and Kilkenny will contest the final, Dublin go into the All-Ireland preliminary quarter-final.

“I have to say I’ve been in Munster hurling all my career before Wexford, this is incredible, the atmosphere down here, the rivalry with Kilkenny, and I’m so lucky to be part of it,” added Fitzgerald. That the reprise will be a Leinster final makes that rivalry even greater: Wexford haven’t contested the final in nine years, haven’t won since 2004.

“If you’re a hurling person, you want to be playing the best, and the respect I have for Brian Cody and his team is immense. And I’m delighted we get the opportunity again, and I’m sure Kilkenny will feel the same. Two weeks’ time will be an unreal occasion, but we have to make sure it’s a match we’re going playing. Right now I just want to go home and relax.”

There was some controversy at the finish when match referee Fergal Horgan appeared to whistle up about 30 seconds short of the allotted four minutes of added time, although Cody afterwards suggested the problem may have been with the stadium clock stopping for a minute before spilling into injury time.

At that stage it felt properly wild, Lee Chin hitting the last long-range free for Wexford two minutes into that added time, levelling it again – just after an equally sweet free from TJ Reid had edged Kilkenny back in front. They’d looked inseparable throughout the game, every hit, score, tackle and block matched by the next, no inch given or taken.

Kilkenny held the slight advantage for much of the second half after Adrian Mullen’s brilliant goal on 44 minutes. In that last hurricane of a few minutes Wexford were without Matthew O’Hanlon, who was sent off on a second yellow card for a hit on Enda Morrissey; Aidan Nolan was also shown a straight red card after the final whistle for remonstrating with the referee.

It sets up the Leinster final to be wilder again. Mullen celebrated as if his season hinged on it, as well it might have, the Ballyhale Shamrocks teenager scoring 1-3 in a stellar display. Pádraig Walsh was immense in the second half, Paul Murphy and Joey Holden both scoring from corner back.

TJ Reid started with 5-23 already next to his name from Kilkenny’s opening three games: he finished with 0-7 here, all frees, a little more muted but well marshalled by O’Hanlon. After Mullen’s goal Wexford chased flat out, points from Rory and Jack O’Connor huge in keeping them in touch, Chin missing a few placed balls he will regret.

They reached half-time at breakneck speed and in the still blazing evening sunshine. Wexford had the summer breeze in their backs and must have felt it too as they raced into an early lead, Conor McDonald firing over the first point after 15 seconds.

Walter Walsh’s boomer levelled it at 0-5 apiece after 15 minutes. McDonald had a super goal chance on 21 minutes before Pádraig Walsh made an equally super flick; Kilkenny won back possession and chased up the field and Colin Fennelly split the posts.

Two minutes after that Rory O’Connor’s shot at goal was stopped just short of the line by Huw Lawlor, and sent out for a 65. Chin converted that, but still the sense was these were the sort of goal chances that Wexford are often left to rue.

Back and forth they went, Diarmuid O’Keeffe hitting four excellent points from play from the Wexford midfield in the first half, while Reid swept over every free chance they got.

Cillian Buckley made his first appearance all year, starting at midfield, lasting 50 minutes but making his presence felt, and there is the sense both teams can improve again for the final. What is certain is that new champions awaits: “Sure everyone knows the quality of Galway, a top team, an outstanding team,” Cody noted of the departure of the two-time defending champions.

“I’m sure it’s hugely disappointing to them, and it’s going to be a surprise in everyone in the hurling world, no doubt about that. But I’m not saying that because Dublin beat them. Dublin are a top team, I’ve said that many times, so it’s no surprise they won. If we had lost here, we were gone, and that’s the competitiveness of the thing, and the quality of the teams.

“But I’m sick and tired of talking about formats, and I’m not going to talk formats right now. We can only play the championship that’s in front of us, and right now we’ve a big game coming up in two weeks’ time.”

Pumas captain Pablo Matera suspended over racist social media posts 08:54
Entire Newcastle squad to self-isolate amid Covid-19 outbreak 07:35
Comfortable wins for Munster and Ulster; Full panels can now attend GAA matches 07:24
Gerry Thornley: Maybe the new Ireland could do with a little of the old detail 06:00
Kevin McStay: Beautiful chaos of All-Ireland to end in a Dublin-Mayo final 07:57
Crossword Get access to over 6,000 interactive crosswords