Drama in the east gives way to southern discomfort 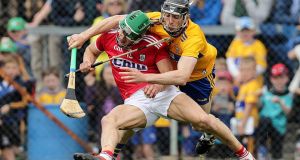 Follow that. Actually, Munster couldn’t. Leinster, the more dismissed of the provincial championships, served up most of the drama on a weekend when the hurling summer reached the end of the beginning.

The next phase will see renewals of two of the weekend’s matches in the provincial finals: Tipperary travelling to the LIT Gaelic Grounds to take on Limerick and an old school Kilkenny-Wexford in Croke Park, both on Sunday 30th.

In a way, nothing was going to compare with the almost oppressive tension of Saturday evening in Wexford and Donnycarney, as crowds frantically sought results and clarifications, uncertain whether they would be in provincial finals, All-Ireland preliminary quarter-finals or simply redundant for the summer.

That final, sombre prospect fell to Galway and Clare in vastly different circumstances. The former, All-Ireland champions in 2017 and odds-on to progress on Saturday afternoon, ended their day and their year in Parnell Park with defeat by Dublin for the first time in six years.

Yet that was only part of the dread equation for Micheál Donoghue’s team. Defeat had to be accompanied by a draw between Wexford and Kilkenny. Lee Chin’s free into the wind in the third minute of injury-time tied it up in Innovate Wexford Park and doomed Galway.

Clare, on the other hand, redeemed a dispiriting season with a battling performance in Ennis to defeat Cork, who nonetheless limp through in third place. The elements helped the drama production with sheeting rain, thunder and lightning accompanying a contest that saw goals, scraps and the home team’s joint-manager Gerry O’Connor sent to the stand for knocking over Cork’s Daniel Kearney. In Clare’s case the lack of a draw sealed their fate.

In Thurles, the counties, who will re-engage at the end of the month in the Munster final, Tipperary and Limerick, tussled before a bumper crowd of 39,115 but the emerging lack of consequence for both teams had a dulling effect on the occasion.  Had that ended in a draw, Clare would have qualified ahead of Cork on the head-to-head but once Limerick didn’t budge off four points, the Banner’s goose was cooked.

The teams in Thurles had taken different approaches to the match, which if not quite a dead rubber certainly wasn’t the picture of health. Tipperary’s selection was more or less full strength whereas Limerick rotated.

Rain clouds spilled on Semple Stadium as well but with not quite the ferocity assailing Ennis. Tipperary’s forwards did the necessary, making life hard for the Limerick defence both with the ball and without, as they hunted down their markers in possession.

Victory so for Tipp but at a price. Two form players, corner back Cathal Barrett and wing forward Patrick ‘Bonner’ Maher had to go off in the minutes before half-time – the latter on a stretcher.

“Yeah,” said manager Liam Sheedy afterwards, “we won’t exactly know the impact of those injuries yet. Obviously Cathal and Bonner are two really serious warriors for us and it’s really unfortunate to lose both of them in the first half.

“Just overall we are very happy, obviously, to come out with a victory is very pleasing and it means we have concluded the league stage of this championship and we find ourselves in a Munster final.

“We aimed to get into the top three and find ourselves in the top two. It moves now from the comfort of having the league gone and into the real business end of this championship.”

His opposite number John Kiely took stock after a provincial campaign that to date reads, won two, lost two, going into the Munster final. Unhappy that his team had to play another sequence of three successive weeks, as last year, he was looking forward to the rematch.

“Yeah, listen, it’s great to have an opportunity to go back. In sport you don’t often get the chance two weeks later to go back and right the wrongs, as it were. We just didn’t feel we were 100 per cent on it today and that seems to be the challenge with that third match in the Munster championship. It is really, really difficult.”

The principal of Abbey CBS in Tipperary town, he was asked about the border rivalry in the coming fortnight.

“Listen, it doesn’t matter where I work. This one, this is all about hurling. I’m a Limerick man and we have Tipp coming to town for the Munster final. We need to significantly improve our performance in that final if we’re going to have a cut off it.”