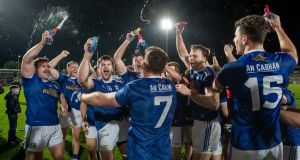 Peter Reilly has been this way previously. Wing forward on the last Cavan team to win Ulster, in 1997, he also managed the county to back-to-back provincial under-21 titles in 2013 and ’14.

In the second year they came up against Dublin in the All-Ireland semi-final, which was fixed for O’Moore Park.

“I remember in 2014 we were playing Dublin in Portlaoise and we fought really hard to change the venue because they had played two previous matches there and we were frustrated and annoyed that it wasn’t moved. It was wrong, in my view.”

In the event they lost narrowly to a side captained by Jack McCaffrey, which went on to win the All-Ireland and featured many of the current Dublin side, such as Brian Fenton, John Small, David Byrne and Paul Mannion.

It’s a topical issue for the county again as, after Sunday’s exceptional win in the Ulster final, they are back in the All-Ireland semi-finals for the first time since his own team 23 years ago.

It has been suggested by former Tyrone All-Ireland-winning captain Peter Canavan that the semi-final against Dublin should be played in Navan, as it would be a more neutral venue in a year when no crowds are allowed anyway.

“My personal view,” says Reilly, “is that it would be a good idea but I’d like to hear the views of the players and management. They could say that the place to play All-Ireland semi-finals is Croke Park.

“That might be their option and that’s fine but it’s a massive advantage to Dublin to be playing in Croke Park. They’re probably the best team ever but there’s no doubt that when you’re able to sling your bag in the car at the exact same time every match and walk up to the same seat where you’re going to tog out and go to same spot to warm up – that’s a comfort zone that isn’t available to any other team.

“They know every dark spot in Croke Park and every bright spot too. My personal opinion would be to try and move it from Croke Park.”

Cavan’s win was a major shock, as Donegal were going for a third successive Ulster title and also being talked up as perhaps the biggest obstacle to Dublin’s prospective six-in-a-row.

Reilly doesn’t pretend that he saw it coming although, as someone heavily involved in developing talent in the county he believed in the side’s potential.

“No. In fairness, the form lines suggested a Donegal win and that’s why so many, including me, didn’t see it coming.

“Hindsight’s great though and looking back at the performances against Monaghan and Down, you could see that there was some great football played when they were coming back in those games. Someone said if they could put the two halves together like that, they’d have a chance.

“I always considered the players were there. I was at a club function over the summer and everyone was reminiscing and saying, ‘what’s gone wrong?’ I said that not a lot’s gone wrong and was asked did I think we could win an Ulster? I said that we could and that we’d players as good as any in Ulster.

“That was in June or July but by the end of the league I accept that it didn’t look likely.”

Cavan is one of the great traditional football counties and they were a dominant force in the game between the 1930s and 1950s, winning five All-Ireland titles but the modern era has not witnessed that level of achievement.

On top of the 23 years that passed between 1997 and Sunday, there had been another 28 years back to the previous win in 1969. What did the team of ’97 feel about the county’s future after bridging such a gap?

“Ulster is ultra-competitive. This is only our second title in over 50 years. I mean we were well beaten last year by Donegal. I know there was only five points in it but it was a big beating over the match as a whole – and we came back and beat them this year. Things change quickly.”

He’s aware of the irony that despite Donegal being tipped to give Dublin a stern examination, their conquerors will be distant outsiders going into the All-Ireland semi-final against the serial champions.

“We’re playing Dublin now and no-one’s giving us a chance but no-one gave us a chance on Sunday either so why not make it two?”