‘You never, never have an easy game against them’ says wary Tribesmen captain 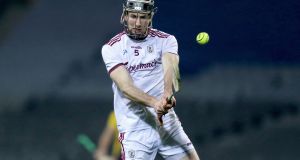 Padraic Mannion: “It’s a Leinster final at the end of the day and any time there’s a cup up for grabs, obviously you want to try and win it.” Photograph: Bryan Keane/Inpho

Galway hurling captain Padraic Mannion said the hurt at failing to make it out of Leinster last year is not being used as a driving force this time round as they prepare to face Kilkenny in the provincial final on Saturday evening.

A bizarre series of results last season saw 2017 All-Ireland champions Galway lose to Dublin in their final game (as Wexford and Kilkenny drew) and miss out on score difference in the Leinster round robin. But Mannion said they are looking forward and not back at this stage.

“We didn’t speak about it as a group. Maybe individually, for lads it might have been at the back of their minds. That seems so long ago now. Even the league earlier on seems like a different season altogether now. A long break but with all the club games we feel like we’ve a lot of hurling done in some ways. It was great to get back into the championship mode again.”

The 27-year-old said the Cats will provide a different type of opposition to a Wexford side they defeated by 1-27 to 0-17 last Saturday week in their first outing.

“It’s like any game you play against Wexford, it’s very tough and they just challenge you in so many different ways that you just have to be really sharp and really on it. I think early on, even myself, I was a little bit off it early on and we nearly got caught for a goal. Thankfully we grew into the game and got on top eventually.

“Kilkenny will be different in some ways but very similar in some ways too. Obviously, the fact that they don’t play the sweeper, they’d be known for playing a more orthodox 15 on 15 as they call it. They’re still an unbelievable team and you never, never have an easy game against them.”

The Ahascragh-Fohenagh clubman said it was great to get a championship game under their belt as they weren’t sure what to expect in an empty stadium and after such a long lay-off.

“I think when we ran out onto the pitch and maybe a little bit in the warm-up, it was a bit different alright. We were just used to having the noise in the background but once the game is thrown-in it, it was fine and like any other game really.

“I found myself probably a bit more nervous than I would have been before just because it’s been so long and I had an injury or two myself, so I hadn’t an awful lot done. You’d be a bit anxious alright but once you get out it’s great to be out there and you enjoy it.”

Galway manager Shane O’Neill is sweating on the fitness of Daithí Burke and debutant Fintan Burke but Mannion said they have a good squad and are fired-up to try bring the Bob O’Keeffe Cup back across the Shannon for the fourth time.

“It’s a Leinster final at the end of the day and any time there’s a cup up for grabs, obviously you want to try and win it. Obviously, it’s slightly different when you’re a Galway team playing in Leinster. But any time, whether it be a league or provincial or All-Ireland, when there’s a trophy up for grabs you want to get your hands on it,” added Mannion.