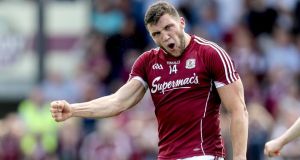 Galway’s Damien Comer reacts after scoring a goal that was disallowed in the All-Ireland SFC quarter-final Super 8s game against Kildare at Newbridge. Photograph: Laszlo Geczo/Inpho

Table tops stowed, seats in fully upright position, the Super 8s were eventually cleared for a proper take off, the nature of this game coupled with the end result up in Clones swiftly moving things from zero to supersonic.

With one round left to play only Galway are now sure of their semi-final place from this group, and only after eventually shutting the door on Kildare in a game where everything was up for grabs until closing time. In the end it shuts the door on Kildare’s semi-final hopes, although they’ll head to Killarney on Saturday week with the chance to possibly end Kerry’s hopes as well.

On another dog-day afternoon it was still a one-point game going into injury time, before Galway’s Seán Kelly and then Damien Comer made sure of it for the Connacht champions. They were worked to the end for it too, Galway finishing with a beautiful spread of 13 different scorers, everyone from number five to number 15 and two replacements too, Seán Armstrong and Gary O’Donnell, that being one telling difference.

Kildare were cut to 14 men on 46 minutes, losing their central attacker Daniel Flynn for a strike on the back of the head of Seán Andy Ó Ceallaigh. Manager Cian O’Neill – not denying the incident, but justifying it – claiming it was some sort of act of self defence, Flynn merely doing what he had to do to get the man off his back.

Despite the loss, and briefly allowing Galway to pull four points clear, Kildare never surrendered, this being Fortress St Conleth’s, substitute Chris Healy closing it back to a one-point game just on the arrival of four minutes added time: but time enough for Kelly and Comer to make sure for Galway.

Suitably deflated, O’Neill’s team still don’t have anything left to play for, even with Kerry drawing with Monaghan in Clones. Monaghan now need to beat Galway at Pearse Stadium on Saturday week, August 4th, to join them in the semi-finals, while Kerry will play out the rest of their fate at Fitzgerald Stadium. Both games will start at 6.0pm.

For Galway manager Kevin Walsh the end result was as satisfying as the nature of it, especially given that scoring range. “That’s a lot of hands to the wheel all right,” he said, “but there were lots of turnovers, lots to work on too. Obviously it was very warm out there and that took its toll, Kildare made it very hard for us, but we’ll certainly take the win.

“I’ve said this before, there were one or two games early on this year that we had to dig it out, and probably shouldn’t be in that position with the amount of chances we had. I could be wrong here, but I’d say we probably missed a lot of chances today that should have put us a bit more comfortable.

“But in fairness, when it came back to one point at the end, they had the Newbridge crowd behind them. But in fairness the Galway support today was absolutely superb and it really drove us on as well, to learn to dig it out away from home on a tight pitch.”

It was an absorbing contest, especially how deep Kildare had to dig after losing Flynn, but never letting it crowd their spirits. Galway reached out to four points at one stage in the second half, but Kildare’s energy never deserted them – including goalkeeper Mark Donnellan, who pulled off several key saves, including one at the death from Comer.

Galway promptly resumed from their three-point thumping over Kerry in Croke Park last Sunday, Michael Daly slicing the posts after 45 seconds and instantly setting the pace of the game. Daly hit a second on eight minutes, injuring himself in the process – and he was replaced by Patrick Sweeney.

As the game wore on, so too did players drift in and out: Comer was typically menacing in front of goal, finishing with three from play and he might well have had a goal too when he was brought down just outside the area in the second half. Sweeney later also drew an excellent save out of Donnellan too.

Seán Walsh missed his first free but balanced up later, finishing with 0-4, one from play, and each of their half-back scores – Cathal Sweeney, Gareth Bradshaw and Johnny Heaney – came when Galway needed them. Peter Cooke and Thomas Flynn covered the usual ground at midfield in the absence of Paul Conroy.

What troubled them most was the pure quality of Kildare’s scoring, especially in the first half. Back at the scene of their home triumph over Mayo, three weeks ago, they immediately picked up on that atmosphere again: Flynn and then Neil Flynn opened their scoring equally promptly.

After 10 minutes they were level again and so swung the pendulum for the rest of the first half. With Kevin Feely roving between full forward and midfield, and Eoin Doyle and Mick O’Grady excellent in defence, Kildare were winning plenty of possession and more importantly made it count.

Daniel Flynn couldn’t quite finish off a one-two with Feely, but Kildare then hit seven points without hitting a single wide – including the proverbial monsters from Paul Cribbin, Fergal Conway and Neil Flynn.

The only problem was Galway were doing likewise. Kildare sneaked two points clear on 22 minutes thanks to Cribbin, before Comer and Sweeney levelled it again. Kildare rolled with the punches and got to half-time just a point in arrears, Thomas Flynn having the last word from midfield to settle it on Galway 0-11, Kildare 0-10.

It stayed at that hectic rhythm and tempo until the end, Galway also extending what may well be one of their longest-winning streaks – Kildare’s last championship win over Galway coming way back in 1926 All-Ireland semi-final.