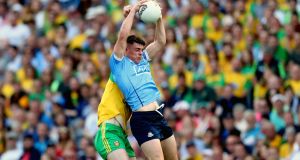 Brian Howard fields a ball despite the challenge from Donegal’s Eoghan Bán Gallagher during the clash at Croke Park. Photograph: James Crombie/Inpho

Paul Flynn is far from finished, he demonstrated that in his 17 minutes off the bench in Croke Park last Sunday, but a worthy heir has already emerged.

Within Flynn’s first five minutes on the field against Donegal, the four-time All Star had made an interception, won a kick-out, kicked a point and made three passes including an assist. The 32-year-old was on the ball five more times and added another point as Dublin ran down the clock to open their Super 8s campaign with a five-point win.

That victory also confirmed Flynn’s successor – Dublin’s new Duracell bear – to be Brian Howard. He was simply outstanding against the Ulster champions, registering 35 possessions, scoring one point off his right foot, another off his left, making one interception and catching four kick-outs. He departed the action with almost 20 minutes left, having truly arrived.

Flynn has featured in Dublin’s last seven championship matches but has not started one since the 2016 All-Ireland final replay (he as struggled with injuries and his only three starts since then came during last year’s league).

While his recent form does suggest he’s intent on regaining his jersey, Jim Gavin is currently favouring a 20-year-old from Raheny. And hopes are high in the capital that he can replicate Flynn’s impact over the past decade, into the next.

Howard has played more minutes than any Dublin footballer in 2018. He’s started in 13 of Dublin’s 14 matches in the O’Byrne Cup, the National Football League and the championship. In total he’s played 811 minutes, 43 minutes more than the next highest, Ciarán Kilkenny.

Taking his two O’Byrne Cup appearances out of the calculations and only Kilkenny, Brian Fenton (731 minutes) and Niall Scully (680 minutes) have featured more for Dublin in league and championship. Howard has managed 0-10 in his 11 matches so far in those two competitions, where Dublin have used 36 players, and 0-11 in his 13 matches including the Leinster pre-season competition.

Before this summer Howard had made only two championship appearances, coming on for a combined total of 13 minutes in the Leinster semi-final and final. The highlight of his three-minute cameo (plus five minutes injury time) in the latter came when he turned over Keith Cribbin under a breaking ball and broke through to fist over a point. His first championship point for Dublin, in his first major final. With an overlap available either side of him, and with that the possibility of a goal, Howard was decisive in taking his point.

He showed the self-confidence, ambition, and decision making which has already seen him assume a leadership role for the three-in-a-row All-Ireland champions. Albeit the player who featured in those encounters was a very different one to the number five in Croke Park last weekend.

His rate of improvement game on game since then has been remarkable. Like Flynn before him, the DIT student is a converted underage midfielder who can operate in either the half forward or half back line. It’s an adaptability which has become more and more of a requirement in the modern game.

Against Donegal he played at wing forward – the position Flynn made his own from 2011 – exploiting the space in the middle third as Donegal retreated behind their ‘45’.

He went on to have 41 involvements (12 of those were in the first 15 minutes) in 53 minutes, and played a crucial role in both of Dublin’s goals. The first of those arrived after Howard broke a tackle in the middle of the park to kickstart an attack which Niall Scully finished. Howard then reacted sharply to a loose Jonny Cooper handpass, broke a hefty tackle and popped the ball back to Cooper. He then fed Scully who repeated the trick for goal number two.

Howard replaced his clubmate, Fenton in last year’s Leinster final. Twelve months later and between them the Raheny duo accounted for seven of the 17 balls that were caught overhead and cleanly from kick-outs in the Super 8s maiden weekend. Howard alone made up just under a quarter of them, showing that the art of high fielding is alive and well (and clearly being practised) in Dublin’s squad.

This weekend in Omagh, Tyrone will do well to hold Dublin’s middle eight to a similar aerial output. Against Meath, Cavan and Roscommon they were outfielded for a combined nine clean catches to just one.

Howard was in midfield on last year’s Dublin U-21 Leinster and All-Ireland-winning team, scoring 0-1 in the final against Galway. A year earlier he was in the half-back line when Mayo edged them in the semi-final. He was a substitute on the minor team who won Leinster in 2014, and a year later he was centre back when Kildare knocked them out in the provincial semi-final.

Gavin, like Pat Gilroy did with Flynn, has identified the need to mix physicality and intensity with the speed and exuberance that his squad has in abundance. Howard is hungry to improve, hungry to win primary possession, hungry to impact upon the game, hungry for work, and with excellent basic skills and game intelligence.

In the 2013 and 2014 campaigns Paul Flynn started and finished in 100 per cent of Dublin’s matches, he scored 3-28 in 22 games from 2011 to 2014. Beyond that though he set the tone physically, and has consistently been the man to catch, score, tackle or win the breaking ball whenever Dublin need it most. The 56 minutes he played in last year’s All-Ireland final is the least he has featured in any of Dublin’s five winning finals since 2011.

If the reception to his first point last Sunday is anything to go by, Dublin fans are clinging on to the last few years of their Mr Dependable. In Brian Howard though, they have a player who has already shown he is worthy of comparison.

1 Ireland 23 Georgia 10: How the Irish players rated
2 Ireland’s autumn of discontent continues with abysmal Georgia showing
3 Jim McGuinness: There is a way to save championship and make it competitive
4 Ireland grind their way to grisly win over Georgia
5 No fireworks but Limerick get the job done against Galway
Real news has value SUBSCRIBE