Majestic Murphy brings the magic for Donegal at Hyde Park 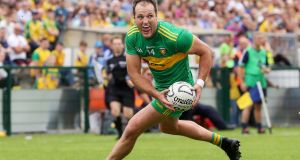 In the 26th minute of this game in a balmy Hyde Park, Donegal supporters saw something close to a vision of summer perfection. It was Michael Murphy, thundering onto a ball from the full forward position, shaking off Niall McInerney on the turn and then accelerating towards Colm Lavin’s goal. Mine eyes have seen the glory and all that. You could almost forget that Murphy on the move with the ball is one of the more majestic sights in Irish – or any – sport.

As it happened, Murphy fluffed his solo and the move came to nothing. But those few seconds provided a portent for what was to come. A menacing figure in front of the Roscommon goal, Murphy fired three points in a row in the last seven minutes of the first half in a performance that felt like a throwback to more carefree days.

One of the issues for Donegal in recent seasons is that the Glenswilly man felt obliged to be everything to everyone, all at once: captain, leader, workhorse, playmaker. All of a sudden it was like realising that Jimi Hendrix had been acting as roadie for a few seasons. Here, on a sunny Saturday evening, Murphy remembered the simpler joy of being one of the best inside forwards the game has seen. And it was breathtaking to witness.

“Murphy can play anywhere,” acknowledged Declan Bonner after watching his captain’s regal display. “That’s the bottom line. I’d rather look at the whole team, the whole group, and Michael is part of that. He did really well out there. Wherever Michael goes, he’ll perform. He’ll always contribute. You take every game on its merit. You have you get your hand on ball in that middle third before you do anything with Michael at full-forward. Michael is that crucial to the team. We know that if we’re going to come out on top in midfield, then we’ll get Michael inside.”

That’s the gamble. But it has been a long time since Murphy played with such liberation, and the day was a poignant reminder to Donegal supporters of the talents locked within that frame. If Donegal are to win a third All-Ireland in the Murphy era, it will surely be with their talisman obliterating full back lines.

Donegal were 0-10 to 0-5 ahead at half time and left about half a dozen excellent shooting chances behind them. It took them about 15 minutes to get to grips with a much more defensively oriented Roscommon framework, with Niall Kilroy and Brian Stack dropping deep as the home team vowed to give nothing away through the centre of their defence.

Roscommon started brightly, with the Murtagh brothers and Brian Stack striking wonder points from distance for a 0-3 to 0-1 lead after seven minutes. Those scores made a convincing argument that they had shaken off the blues inflicted by Tyrone a week ago. Two fierce defensive sequences in which McHugh and Murphy were crowded out and scalped generated a rebel yell from the stand.

But the trouble with wonder scores is that they are just that: four of Roscommon’s first half scores from play were spectacular, but for too long they were confined to trying to find Diarmuid Murtagh and Cathal Cregg, their deep-lying forwards, with hugely ambitious long-range passes. Donegal got to grips with midfield, with Michael Langan a huge aerial presence, while Frank McGlynn and Ryan McHugh ran the show. The game was gradually slipping away from Roscommon and Kevin McStay, the Roscommon manager, became agitated just before half-time, vociferously lobbying the linesman to interject. McStay is nothing if not courteous; it’s hard to imagine him riled without good cause.

“There were two dreadful calls at the end of the first half. Michael Murphy pushes one of our lads on the solo and kicks it over. Fair play, he’s a big strong man – I’m not giving off to him now. I have huge admiration for him, but it should have been a free-out,” he said afterwards.

“And then the one before half time; I take it ye knew that was a free? Everyone in the stadium knew that was a free. Ciaran was apparently blind-sided and I totally accept that. But the linesman wasn’t blind-sided; he had a perfect view of it for me. I asked him to relay the free – and this happens all the time. But he just blanked me and essentially told me ‘get out of my space’.

“We are all working so hard at it, and to be just dismissed like that isn’t very pleasant. It is an amateur association, we are all doing the best we can for our counties and are teams. Just to be dismissed – that was the bit that annoyed me the most. I was obviously a bit aggressive to him, he felt. I threw a ball that had no intention of hitting him and apparently it landed on his shoulder or head. That was noted to me and I came in and apologised at half time, and it was accepted as far as I know. But then the referee said, ‘I am going to have to go with my linesman that you were overly aggressive,’ and he asked me to sit down for the second half, which was disappointing, but there you go.”

The stand-off may well lead to disciplinary measures for the manager as Roscommon prepare for a daunting visit to Croke Park. The Super 8s have been a tough experience for Roscommon. The languid class of Odhrán MacNiallais was the big talking point of the second half as Donegal knuckle down for a unique championship shindig in Ballybofey. The linesmen would want to have their Ps and Qs in order for that one.