Miriam Lord: Dublin and Mayo leave us all in bits 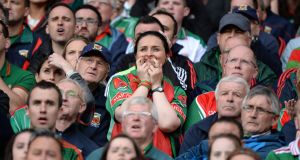 But that was some game.

Dublin and Mayo left us reeling.

In bits. The entire place was in bits after it.

Not just in Croke Park, but all over the country and beyond, yesterday’s All-Ireland final provided an incredible sporting occasion which will be talked about in the footballing world for ages to come.

Dublin are champions. Three in a row for Jim Gavin’s men and the capital city rejoices. What a team. What a day.

As Stephen Cluxton regathers the Sam Maguire and Philo blasts over the sound system and the lads storm across the pitch to Hill 16 because The Boys are Back in Town again.

But it’s almost too much. Mayo’s despair cannot be ignored.

How many years is it now? Is the county really cursed? What must the men from the west do to win their hearts’ desire?

Oh, but it’s wonderful when your county triumphs. Sentimentality goes out the window when that ball goes in and one kick is all that stands between victory and defeat. So they celebrated on the Hill and around the stadium and feted their heroes. But in those heady moments after the final whistle, hearts went out to the loyal, ever-loyal fans of Mayo who must surely think their destiny is forever to be twinned with disappointment.

With minutes to go and the final outcome still in the balance, a vital free kick rebounded. The hordes of green and red groaned.

“Oh no, no, no,” came the anguished cry from a supporter beside us, head buried deep in his hands. “Don’t keep doing this to us.”

‘ In Jim Gavin we trust’

This final had no neutrals. It was Dublin versus the rest of Ireland, and understandably so. The last time Mayo won the All-Ireland was in 1951. There have been many close calls. With each lost opportunity the longing grows.

This time, this time we’ll do it.

They thronged the roads to Croker yesterday, brimming with justifiable optimism. The all-conquering Dubs may have been the pundits and bookies’ choice, but Mayo took them to within a point last year and that was after a replay.

Former taoiseach Enda Kenny was so nervous on his way into the stadium he could hardly think straight. It took him the best part of an hour to get down the North Circular and Jones’s road as Mayo fans stopped him for selfies.

He could hardy talk either, already hoarse and not a ball yet kicked.

Another former taoiseach, Bertie Ahern, was also on the selfie circuit, mobbed by Dublin fans. “In for another round of blood, sweat and tears,” he said, nervously.

The atmosphere in the stadium was tense.

“In Jim Gavin we trust” said one in the Lower Hogan.

John Noone was in the Upper Hogan with his daughter, Fine Gael senator, Catherine. The 80-year-old retired vet played for Mayo in his day and was in the crowd when the county last tasted success. He was quietly confident, but after so many All-Ireland setbacks for the county, he wasn’t making a big thing of it.

The whiff of cordite from the pre-match smoke-bombs was still in the air when the first score came. Young Dublin forward Con O’Callaghan fired in an early goal and put the fear of God into Mayo supporters.

They came back, levelled and established a two point lead. Delirium.

How could we not? It was before us – the noise, the passion and raw emotion.

There was queasiness too from Dublin fans, who knew they weren’t turning up for a coronation.

Half-time was no help to either side. Mayo went in a point ahead. Nothing in it.

If Mayo win, the Government won’t be happy,” joked a Dublin fan. “There won’t be a house built in Dublin.”

Trina Blewitt from Ballina was taking a breather with her daughter, Kate, most probably the youngest fan in the ground. Kate, at four months old, was blissfully asleep with big red noise protectors over her tiny ears.

“The atmosphere back home is just electric. I really hope we can do it, but it reminds me of this time last year and that frightens me a lot,” said Trina.

There was an uneasy camaraderie between rivals.

“If Mayo win, the Government won’t be happy,” joked a Dublin fan. “There won’t be a house built in Dublin.”

We saw builder Mick Bailey nursing a nervous pint during the interval. He wasn’t the only one doing that.

You could sense the tension rise in a nail-biting second half. The lead changed again and again. Could this be Mayo’s time?

Not if the Dubs could help it.

Then Lee Keegan scored a goal for Mayo and the fans erupted. John Noone jumped to his feet, waving his match programme in the air.

This really could be happening.

The announcer delivered the news. “Six minutes of extra time.”

Dublin’s Dean Rock sent over a free. Dublin ahead by a point. The seconds counting down. Mayo’s goalkeeper faffing over the ball.

“Kick it out, for f**** sake! Kick the feckin’ ball out!” There was screaming mayhem in the stands.

John Noone, head down, said nothing, because there was nothing to say. Eighty years old, still waiting since 1951, tears in his eyes.

And Ronnie Drew was singing Molly Malone, like he never left us and there were tears in Dublin eyes too.

A Dub in Roman centurion regalia recorded the celebrations on his iPhone. Cluxton led his team on a lap of honour. They kicked balls into the crowd. One landed near us high in the Hogan and three children scrambled to catch it. But it was gathered by a man, a Dub, who held it close for a few moments and then handed it to a little red-haired lad who squealed with delight.

My fiancé is from Galway and they brought their title home and we’ve brought nothing. That’s a great start to married life.”

“I’m going to leave it in my house and keep it there forever,” he said.

Conall MacCoille was the shy hero who gave up the ball. His girlfriend Lorraine spilled the beans on him.

The fans congratulated and commiserated on the way out. Geri Hughes from Crossmolina, who is getting married in 10 days, came to the match dressed in red and green bridal wear. “My fiancé is from Galway and they brought their title home and we’ve brought nothing. That’s a great start to married life.”

Her mother, Patricia, was deeply disappointed, but full of praise for the opposing fans. “Some of them came up to shake my hand on the way out.”

It’ll take all of us a while to get over it.