GAA Statistics: The two Dublin changes that won them the All-Ireland

This year's man of the match, and the favourite for Footballer of the Year turned things around 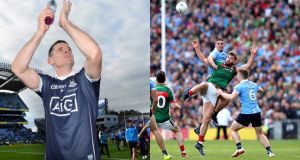 Two key changes made at half-time in Sunday’s All-Ireland final proved the main difference in Dublin’s one-point win. And they weren’t the introduction of Kevin McManamon and Diarmuid Connolly.

Yes, the duo contributed 0-2 between them, and the latter was fouled for the winning point as well as playing a beautiful pass to set Dean Rock up for Dublin’s second last score.

But it was the decisions to put James McCarthy back on Aidan O’Shea, and Stephen Cluxton’s half-time kickout alterations that proved decisive.

In the first half Mayo won six of Dublin’s 14 kickouts. Cluxton kicked eight long, beyond his own 45 metre line, with Dublin winning only two of them. Three of Mayo’s six wins were marks, as they were the more comfortable under the high ball. In fact, Mayo kicked 45 per cent of their own kickouts long (winning 70 per cent of them) which highlighted their preference.

They had a clear advantage in the middle sector, with the O’Shea brothers and Tom Parsons all excellent ball winners and Colm Boyle and co beaver-like under the breaks.

In the second half Cluxton – as well as pulling off a point-blank save from Jason Doherty’s goal effort – had a 100 per cent success rate with his kickouts. All 11 of them were short. The five-time All-Star reduced the average time from the ball sailing over the bar or wide, to his restart, from 14 seconds to 10 seconds. Three of them were struck within seven seconds or less.

Over the full encounter, corner backs Mick Fitzsimons (6) and Jonny Cooper (5) won 11 kickouts between them, John Small and Cian O’Sullivan won two apiece – both in the second half as the defenders all upped their movement for the short restart – while Con O’Callaghan, Paul Flynn, Brian Fenton and Ciaran Kilkenny all won one kickout.

The panic of the first half ended and Dublin’s controlled possession game returned.

Dublin lost wingback Jack McCaffrey to injury early in the first half, and initially moved James McCarthy back to fill in for him. Aidan O’Shea had been roving about – causing havoc – with McCaffrey and O’Sullivan in particular picking him up. In the second half James McCarthy was assigned with a marking job on O’Shea, and while the Breaffy man still made a big impact, McCarthy scored two points and constantly drove at the Mayo defence. He did well to break the kickouts on big Aidan, and also won a crucial mark himself late on.

O’Shea had been playing a blinder in that first 35-plus minutes with 20 possessions within 26 involvements in the half. He caught a massive mark, caught two throw balls, he was linking the play all over the field and was back covering his half and fullback lines.

In the first half he rode two big Brian Fenton tackles as he was left isolated in the corner, managed to take a play and pop a pass. It was a real statement for Mayo, they were every bit a match – and more – for the champions in the physical stakes.

In the second half McCarthy made his own statement by catching the throw-in. O’Shea still had 22 second-half possessions, putting in a real leader’s performance. But he caught none of the five aerial contests he was involved in and his man – McCarthy – scored 0-2 and caught a mark and the second-half throw-in.

At half-time Cluxton was under fire and Aidan O’Shea was the game’s standout player. At full-time Cluxton is the favourite for footballer of the year, and O’Shea’s man is the man of the match.