Some outstanding performances but Mayo come up just short again 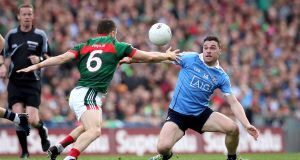 Until late on Mayo had won all but one of their kickouts, and he pulled off a terrific save to deny Paul Mannion a goal. Yet Mayo lost three of their last five restarts with him kicking the final one over the sideline. Rating 7

Last year’s All Star corner back picked up Eoghan O’Gara with the Dublin forward taken off at half time after an ineffectual 35 minutes. In the second half he continued to get out in front and sneak a hand in, time after time. Rating 8

A moment of madness cost his team dearly. Mayo could have been a man up for the final 20 minutes, and then who knows. Before that he’d scored a point and ran himself into the ground. Rating 5

Started well but he did tire and looked gassed coming off in injury time. Made a brilliant block on Bernard Brogan and another interception just before then. Some lovely surges upfield in the first half. Rating 7

Adds Ciaran Kilkenny to his list of man marking victims. Not only did he nullify Dublin’s playmaker, but he drove forward himself and buried a brilliant goal. Also looked to have been fouled for a penalty shout. Rating 8

As always Colm Boyle gave everything for the cause; driving into every contest and offering himself time and again on the overlap. Scored a lovely point before the interval, but did struggle early on with Con O’Callaghan. Rating 6

Some sloppy passes, but as ever O’Shea battled for everything and worked his way around the field making himself an outlet. Came off on 51 minutes with the tank emptied. Rating 6

One great mark in the first half, off Stephen Cluxton’s kickout, and made a massive first-half turnover on James McCarthy. Linked the play well and covered a huge amount of ground at midfield in an end to end encounter. Rating 7

Worked his socks off and won one high ball in particular in the second half that he had no right to. Scored two points and won some key frees. Rating 8

O’Shea had an outstanding first half, catching ball, covering his defence and linking the play all over the field. He continued to impress in the second half although James McCarthy cancelled him out. Rating 8

Ideally Mayo would’ve loved to have been able to bring him in off the bench. He struggled with Paul Mannion at times, and shot a poor wide. Only his second game this summer not to score in. Rating 6

Scored two first half points, continuing his fine form this summer, but he failed to keep his cool and missed a key goal opportunity on 43 minutes. Rating 7

Scored three points from play but Mayo’s main man up top made some uncharacteristic loose passes and he missed a few frees that you’d normally expect him to nail. He has set the bar very high for himself. Rating 7

Created the goal and scored 0-3; bringing his in-play total to 3-24. He was a man on a mission, showing and fighting for every ball and had a real bite about him. Rating 8

His team were focused for the big day. His match-ups were on point again. Aidan O’Shea had a fine game at 11, Lee Keegan did his job on Ciaran Kilkenny. He was quick to reshuffle a few things early on and Eoghan O’Gara made no impact. Rating 7

Diarmuid O’Connor had some bright moments when he came on, but otherwise the Mayo bench failed to lift the team late on when they needed a spark. Rating 5