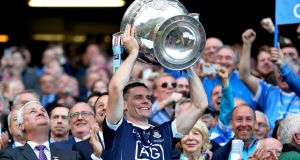 It came down, as it almost always does between Dublin and Mayo, to one kick. Dean Rock, 40 metres out from the Davin goal on an angle, and all the chips in the middle of the table. By the fans’ reaction behind the goal shall ye know the story. Dublin champions for the third year running, Mayo on their knees, desolate once again.

An All-Ireland final that flipped and flopped like a freshly-caught fish again found this pair with nothing between them. The game had everything – a goal apiece, an incredible save apiece, a red card apiece, scores chiselled from rock on both sides. In the end, Dublin took one more chance than Mayo did. It’s a killer for the men from the west but there it is.

We know what these games are by now. We takes various truths to be self-evident when Mayo and Dublin meet.

Edgy? Check. The tension in Croke Park was thick as treacle before throw-in and nothing happened to dilute it as we went on.

Physical? Check. Joe McQuillan had five yellow cards dished out even before half-time.

Close? Checkety-check. They were level 11 times and the early goal from Con O’Callaghan was the one time in the game either side were more than two points ahead.

That goal, a thrilling run that skinned Colm Boyle setting up a deftly-flicked finish past David Clarke in only the second minute, was O’Callaghan’s answer to everyone who warned that for all his brilliance this summer, he hadn’t come up against anything like the Mayo defence yet. The rest of the first half was Mayo’s answer in turn.

It was, in effect, almost a carbon copy of the first half of last year’s drawn final. That one aberration apart, Mayo were comfortably the better side all the way to half-time. They didn’t panic, they didn’t fold, not that anyone who has watched them over the past few years could have imagined they would. Instead, they scored the next three points to draw level and held Dublin scoreless for the rest of the opening quarter-hour.

Above all, they minced the Dublin midfield. Aidan O’Shea was a constant menace around the middle third, catching some kick-outs, breaking others, finding runners. Stephen Cluxton couldn’t get a long kick-out away and if Dublin can’t do that, Dublin have no platform.

Mayo nailed a point from Donie Vaughan straight from a kick-out, one for Kevin McLoughlin after Tom Parsons robbed James McCarthy at the end of a 60-metre chase. Lee Keegan dropped one short after O’Shea had murdered another kick-out. Mayo were humming, Dublin were scratching their heads.

And yet, and yet. Mayo, just as in the first half last year, didn’t make their superiority pay on the scoreboard. They had five wides in the first half and dropped two balls into Cluxton’s chest. Keegan’s one, for instance, ended in an Eoghan O’Gara point at the other end. On a day of inches, Mayo coughed up a yard right there.

Picking out Keegan feels harsh, incidentally. He did his ritual wiping job in erasing Ciarán Kilkenny from the game and got forward in the second half for a goal of goals. But this was a day when the game spared no one.

Mayo’s inability to push on meant that they got to the break only a point ahead, 0-9 to 1-5. It left Dublin in the game even though the champions were mistake-ridden and toothless in attack. Jim Gavin’s decision to name such a star-studded bench hadn’t paid off and it was obvious half-time would see changes.

Paul Flynn was already on the pitch, an early replacement for the injured Jack McCaffrey. Diarmuid Connolly and Kevin McManamon came out for the second half. Dublin upped their energy level and reeled off three quick points with only a Cillian O’Connor free in response from Mayo. The third – a bustling McManamon effort from a Connolly pass – was exactly the sort of thing Dublin had been missing in the opening half.

But Mayo are Mayo. An O’Connor free drew them level at 0-11 to 1-8 with 43 minutes on the clock and soon after Jason Doherty got in one-on-one with Cluxton. Andy Moran, who was having another phenomenal afternoon, dished off a neat pass for the onrushing Doherty but his shot was kept out by Cluxton’s legs.

In the melee that followed, the Dublin goalkeeper fouled Doherty and Mayo came away with a point but it felt like half a loaf. That was until Dublin did the same at the other end, Paul Mannion drawing a save from David Clarke before collecting to come away with a consolation point.

This was a magnificent game now. Brian Fenton chipped a point to edge the Dubs two ahead, O’Connor nipped a free to keep Mayo breathing. Dublin were on top though and when McCarthy galloped through for an athletic score, it looked ominous for Mayo. But they came again and Keegan got in for his goal, again linking with the excellent Moran.

Keegan’s goal came on 54 minutes and brought the house down, sending them 1-12 to 1-11 ahead. But Mayo missed their next chance, an Aidan O’Shea effort that went narrowly wide and soon Connolly levelled the game for the eighth time with an incredible effort as half the Mayo defence hung off him.

So here we were, exactly where we thought we’d be. An hour gone in the All-Ireland final and the sides level at 1-13 apiece. It was going to come down to nerve and the benches, essentially.

Mayo pushed on, Valhalla calling them home. O’Connor got out in front of Philly McMahon for a leader’s point, and followed up with a free when Keegan was fouled on the edge of the large square. It meant that with 63 minutes on the clock, Mayo had a two-point lead. They couldn’t have asked for more.

But Dublin are Dublin, too. Mannion skinned Brendan Harrison to nail a point at the other end, McCarthy ran off Bernard Brogan’s shoulder for an equaliser. Draw game, anyone’s game. Rock skated along the endline to put the Dubs ahead, O’Connor banged a huge one to level it again.

The board went up – six minutes of injury-time. There were two more chances, a free on both sides. O’Connor’s was far more difficult, from out on the left. Agonisingly, it came back of the post. Rock’s wasn’t straight-forward in the circumstances but it was bread and butter by his standards.

He ate it up and Dublin were champions.

1 Cam Newton broke the mould: Can his flame be rekindled at the Patriots?
2 Pete Sampras: The forgotten great with the best serve in the business
3 UK Sport to investigate ‘deeply troubling’ gymnastics abuse allegations
4 Tipping Point: DeChambeau’s transformation raises questions, but who will ask them?
5 Tuilagi case shows England’s home-based clause is out of date
Real news has value SUBSCRIBE