Michael Lundy: Why I laid my health on the line for Corofin 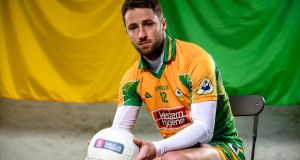 At a time when some players are torn between their club and county, or their college for that matter, Michael Lundy had another decision to make. Was he putting his club Corofin before his health when playing in the AIB Connacht football final last December?

Lundy, one of the stars of Corofin’s 2015 All-Ireland-winning campaign, had undergone emergency surgery just 10 days before to remove his appendix. Doctors often differ, and patients sometimes die, but Lundy insists there was no major threat to his health – beyond the possible reopening of the wound and with that a potential hernia.

“It was actually grand,” says Lundy, speaking ahead of this Saturday’s All-Ireland semi-final against Leinster champions Moorefield. “My first concern, when I got the pain in my stomach, and was told it’s probably your appendix, was ‘there’s a game in 10 days’ time, what’s the deal?’

“It was the Galway doctor who sent me in, he knew a specialist happened to be working in Portiuncula in Ballinasloe, and luckily I got the operation that evening.

“I just remember him coming in to me the next day and asking him, ‘is there a possibility of playing in, whatever, 10 days’ time?’ He was like, ‘it’s not impossible, we’ll see how it goes, see how the swelling goes down and the bruising and how the stitches heal.’ The stitches seemed to heal all right and it didn’t seem too bad.

“I told our manager, Kevin O’Brien, ‘don’t rule me out.’ I went training on the Friday just to get involved and I went for a quick run on the Thursday before it and felt all right and he said, ‘see how you get on in the warm-up.’ I think he was a bit conscious of me. I just had to try to convince him that I was all right, and luckily it paid off.”

Indeed, Lundy started against Castlebar Mitchells and scored a crucial first-half goal, as Corofin eventually prevailed after extra time, with that winning their third Connacht title in four years, to go with their now five successive Galway titles.

“I’d asked the doctor what could happen and he said the scar could open, maybe cause a hernia. ‘Is that bad?’ I asked him, and he said, ‘no, it can be fixed.’ That’s all I needed to know. All I wanted to know was could I play or couldn’t I play, and he kind of gave me a bit of confidence that I could play.

If I could have played for New York and stayed with Corofin, it probably would have been an option. But I had to give up my club at home, and it’s hard to do

“I wasn’t hiding away from a challenge because I wanted to get physical. The last thing I wanted to do was not be 100 per cent fit and cost the team, ruin our chances, but I felt like I could input something into the game and luckily I did. Looking back on it, I’d make that same decision 100 times over, yeah. It all worked out. I don’t know was it a bit of luck or what, but I’d do it again anyway, no problem.”

Now, having got over London champions Fulham Irish in last month’s quarter-final, comes the challenge of Moorefield, that game set for Tullamore. Lundy is clearly committed to his club, and intends on recommitting to Galway too, as soon as the club campaign ends.

He did opt out for 2016, when Galway won the Connacht title, to spend the summer in America. He could have played for New York, but that would have meant leaving Corofin.

“Yeah, if I’d declared for New York, I would have had to fully transfer to a club over there. If it was a case that I could have played for New York and stayed with Corofin, it probably would have been an option. But I had to give up my club at home, and it’s hard to do.”

Corofin was taken out by Dr Crokes in last year’s semi-final but, if anything, that’s renewed their hunger to get back to Croke Park on St Patrick’s Day. And after that Galway again beckons.

“Yeah, they have been, they’ve been very good,” he says of Galway’s opening three league wins over Tyrone, Donegal and rivals Mayo on Sunday. “You can say it’s a surprise but within the group they’re probably confident. I haven’t been involved as much because I’ve been away with the club, but things must be going well. It’s nice to beat Mayo any time but at the end of the day the championship is the big one. There’s a game there in the middle of May that Mayo and Galway eyes are fairly focused on. Sunday will mean nothing if you go out and lose in May.”